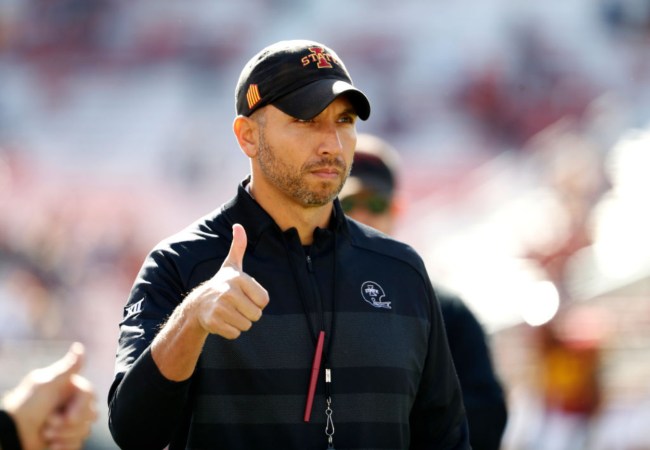 Iowa State played in the Big 12 title game in 2020, and with a lot of talent returning for the Cyclones this season, expectations were high for Matt Campbell’s group.

Plenty of fans and media members alike picked Iowa State to compete for a conference title again in 2021, but that was never the goal for Campbell, he literally admitted that during a recent press conference.

Campbell is much more worried about checking cliche boxes on his team’s resume than actually winning a trophy.

He stood in front of the media on Tuesday, talked in the third person quite often, and said his goal for his team was just to be “the best version of ourselves.”

Matt Campbell knows a Big 12 championship was the goal of many, but makes it clear that it was not his goal.

“Not me. That was never my goal,” Campbell said with a finger in the air after a reporter suggested his goal was to win a conference title.

“But that is not coach Campbell’s goal. That was never said by me.”

Matt Campbell Is The King Of Coach-Speak

That, my friends, maybe the most obnoxious, coach-speak-filled speech in the history of speeches.

Iowa State fans can’t possibly watch Campbell say those things and have faith that he may actually ever win a conference title. He literally said that’s not his goal.

On top of all that, Campbell is being linked to some big-time jobs around the college football world and has been for multiple years now. Athletic directors and fans at other programs have to be turned off, big time, after hearing him spew word vomit as he did on Tuesday.