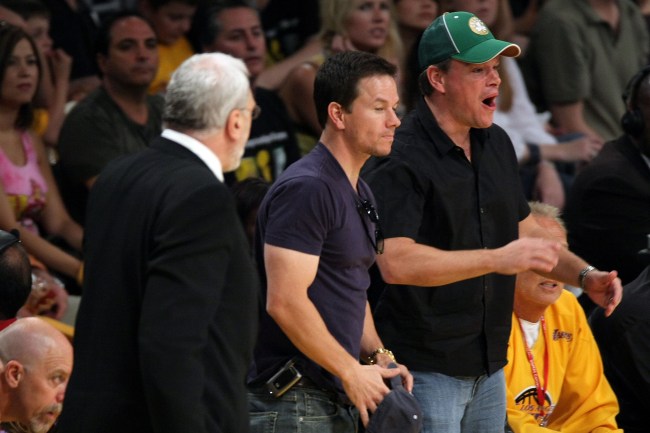 Matt Damon and Mark Wahlberg are two of the most recognizable Boston sports fans on the planet, as the two are diehard in their support of teams like the Celtics, Patriots, Red Sox and Bruins. And, given the amount of titles the two have seen their teams deliver in the past 20 years, it’s easy to get a little boastful, you know? I mean, my Cleveland Cavs won one title in 2016 and I’m still basking in all its glory, imagine what Damon and Wahlberg feel like knowing their favorite teams seem to always be in championship contention. Man, they’re just spoiled.

While Matt Damon and Mark Wahlberg will do nearly anything to support their Boston teams, like all of us, they need to make sure they don’t cross the line. And, while the two Academy Award winning actors were just trying to support their Celtics during the 2008 NBA Finals, they did so in enemy territory, sitting courtside and right by the Los Angeles Lakers’ bench during Game 4 of the series — which led to one helluva story.

Talking to Bill Simmons on his podcast, Matt Damon described how then Lakers head coach Phil Jackson was pissed about how his team had squandered a 20-something point lead, with Celtics legend Paul Pierce going into full “truth mode,” as Damon described to Simmons. Their excitement led to Jackson turning to the two and cussing them out, which led to an unforgettable interaction with the “Zen Master.” Listen to the details below.

The time Damon sat courtside at the 2008 Finals w/ @markwahlberg and got F-bombed by Phil Jackson aka THE ZEN MASTERpic.twitter.com/2GCPfBVwmZ

Man, that’s honestly unbelievable. It’s funny to think that Jackson just laid into two A-listers like Matt Damon and Mark Wahlberg as if they were just two bums on the street. But, hey, the Lakers-Celtics rivalry knows no boundaries, and this is just one example of the hatred between the two iconic franchises.

Included in the clip above was also a short mention about Kobe Bryant talking shit to Damon and Wahlberg, too, with the superstar walking by them before the game and cursing them out as they were getting settled into their seats before tip-off. That’s absolute gold, and something that the two superstar actors will probably never forget.