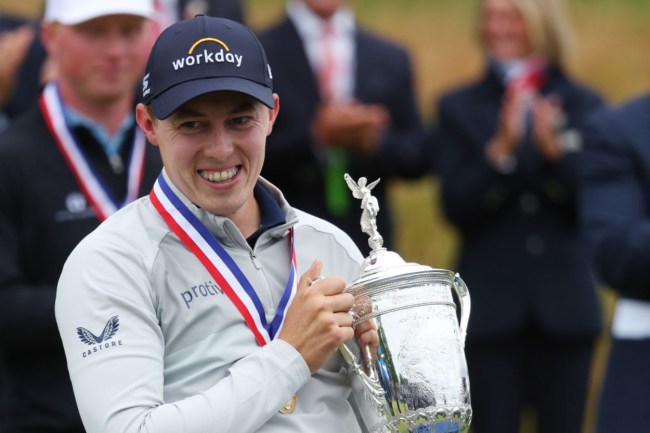 Sunday was a day of firsts for Matt Fitzpatrick. The 27-year-old earned his first professional win on U.S. soil and his first major championship victory with his U.S. Open win at Brookline.

Fitzpatrick also earned his win in elite fashion, hitting 17 of 18 greens during the final round, and his last green in regulation was most impressive.

Holding onto a one-shot lead over playing partner Will Zalatoris and Scottie Scheffler already in the clubhouse at 5-under, Fitzpatrick pulled his tee shot left into a fairway bunker on the final hole.

Fitzpatrick was left with 161 yards to the flag, but also had to deal with a grass mound in front of his ball. Being forced to hit a cut out of a fairway bunker on the 72nd hole of a major championship with a one-shot lead isn’t exactly ideal, but he made it look easy.

He wasted no time, picked his target in the distance, and executed the shot perfectly.

How do you define clutch?@MattFitz94 hit this shot on 18 to help secure the #USOpen title. pic.twitter.com/iQcOGxph0Z

Fitzpatrick will never forget the fairway bunker shot and golf fans will certainly be remembering it for years to come as well.

With his win, Fitzpatrick became the first PGA Tour player to earn his first win at the U.S. Open since Graeme McDowell pulled off the same feat in 2010. Fitzpatrick also joins Jack Nicklaus as just the second man ever to win the U.S. Open and U.S. Amateur on the same golf course, as he won the U.S. Am at Brookline back in 2013.