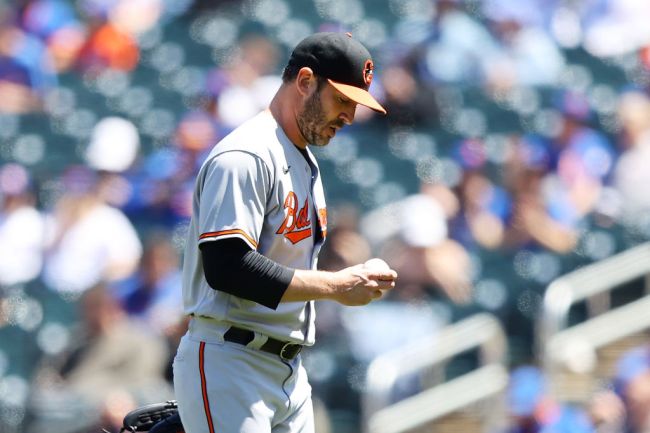 When the New York Mets selected University of North Carolina sophomore Matt Harvey with the No. 7 overall pick in the 2010 MLB Draft, they thought they had drafted a pitcher to help revitalize a staff that was headlined by Johan Santana, R.A. Dickey and Jon Niese. What followed was one of the most unusual timelines in MLB history that came full circle with a standing ovation on Wednesday.

Matt Harvey receives a standing ovation in his return to Citi Field. All class 👏 pic.twitter.com/AZ7jgQPJen

The Rise Of An All-Star.

After a strong two years in the minor leagues, Harvey was called up on July 26, 2012 and posted a 2.73 ERA in 10 starts. He became the first Mets pitcher to start in the All-Star Game in 2013 and it came at Citi Field in front of his home crowd. Harvey finished his breakout season with with a 2.27 ERA across 26 games and it was the first time in a long time that Mets fans were excited. They had their ace.

#OTD in 2013, Matt Harvey started the All-Star Game for the National League squad at Citi Field.

And then he tore his UCL and underwent Tommy John surgery that forced him to miss all of 2014. It was devastating for the organization. But that was okay. What used to be a death wish for pitchers is no longer so, and Harvey returned for the next season.

In his first start back, the 26-year-old struck out nine and didn’t allow a run. He received a standing ovation from the fanbase. That was on April 9, 2015. Harvey went on to hold a 2.71 ERA in 189.3 innings that season and helped bring the Mets to their first World Series since 2000. He was living the dream and partying accordingly.

The Fall From Grace.

During that Fall Classic against the Royals, he threw eight scoreless innings in Game 5 and went back out for the ninth.

It was all downhill from there. Harvey allowed two baserunners, New York lost in extra innings and went on to lose the series.

2016 began with two losses and the man who was so dominant in the two years prior did not look the same. The year was eventually lost when he was diagnosed with Thoracic Outlet Syndrome. Another season-ending surgery.

Fast forward to May of 2017. Harvey started the year 2-0 with a 2.84 in his first four starts. The man who called himself “The Dark Knight” was back. Until he wasn’t. His struggles from the year prior carried into 2017 as he pitched poorly in early months of the season. On May 7, 2017, he was suspended three games for violating team rules. Harvey had not shown up to Citi Field the day before because he was out late partying.

Just over a month later, sporting a 5.25 ERA in 13 starts, he was placed back on the disabled list with a stress fracture. After a nearly three-month rehabilitation process, Harvey was activated from the DL and gave up seven runs in his first two innings. He ended the season with a losing record and a 6.70 ERA.

Harvey’s woes continued in 2018 and he was moved from the Mets rotation to a relief role after four starts. He gave up two hits and one earned run in his first appearance from the bullpen and would not speak with media after the game. His time in New York came to an end shortly thereafter. On May 4, 2018, the organization planned to demote him to the minor leagues. Harvey refused and he was designated for assignment.

Seeing his potential to return to the ace he once was, the Angels signed him to a one-year, $11 million deal in December, 2018. It ended up being a disaster and Los Angeles released him in July of 2019 after posting a 7.09 ERA in 59.6 innings.

He spent time with Oakland’s minor league system after his release before electing to test the free agency waters and signing a minor league deal with Kansas City— the team he once lost to in the 2015 World Series. For whatever reason, he was promoted back to the big leagues in August. Harvey appeared in seven games and compiled a 11.57 ERA in 11.2 innings pitched. It was not the return he had hoped.

Now, at age 32, Harvey is in his first season with the Baltimore Orioles. His numbers have been average. Through the first six weeks of the season, he is 3-3 with a 4.81 ERA and 29 strikeouts in 39.1 innings pitched. The Orioles began the year with 16-20 record and travel to the Bronx to play the Yankees this weekend. Prior to facing their inter-division opponents, Baltimore made a stop in Queens on Wednesday. After a troubled finish to his time in Gotham, the Dark Knight was set to return.

1,105 days after his final appearance with the Mets at Citi Field, Harvey took the mound against his former club. He was met with a standing ovation.

Although he gave up seven earned runs in 4.1 innings pitched, the reception meant the world to him.

I can't remember the last time Matt Harvey was like this in an interview — poignant, reflective, honest, raw. It's clear returning to Citi Field really meant something to him, as did the fact that the fans here received him warmly. pic.twitter.com/4KpWr72hBx

One of the wildest careers in Major League Baseball came full circle on Wednesday. The Mets went on to best their former ace, but sometimes the story is bigger than the scoreboard and this is one of those instances.