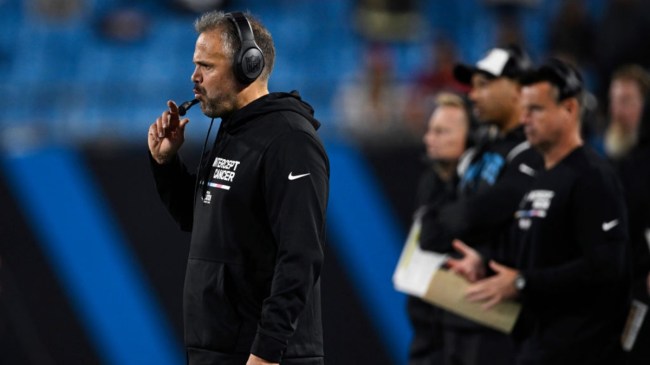 When the Carolina panthers hired Matt Rhule back in 2020, they did so with the hope that he’d be able turn their franchise around the way he had for the Temple and Baylor football programs. Things unfortunately didn’t work out that way.

Rhule wasn’t able to win more than 5 games in either of his first 2 seasons with the team and was fired 5 games into his 3rd season.

Rhule has landed on his feet since the firing, landing the head coaching job at Nebraska, but he is still being asked about his experience in the NFL.

Yesterday he was asked by Peter Schrager what he would do differently about his time in the NFL and revealed that he would take a different job.

Matt Rhule when asked what he would do differently in his time in Carolina opens by saying he probably would’ve taken a different job pic.twitter.com/KDchF5KLKj

I think I probably would have taken another job. It’s a great place. Wonderful people. But I just don’t know if I was a fit there. At the end of the day—we talked about, ‘Hey, we’re gonna have a four-year plan, a five-year plan.’ If you tell me, ‘Hey, we got a two-year plan,’ then I’ma go sign a bunch of free agents and do it. So what was a four-year plan became a two-year and five-game plan real quick.

Rhule also revealed that he believes the franchise is heading in the right direction.

I think the trajectory we were on was correct. It was to have a team that next year could maybe make a big trade. I think you see the signs of it now. When they play well on offense, they win. There’s a good defense there. I give Steve all the credit, I give the coaches all the credit. But I’m part of that building process.

Rhule wasn’t given much to work with during his time in Carolina. The team had a quarterback issue when he was hired and trades for Sam Darnold and Baker Mayfield weren’t the solution. He unfortunately wasn’t able to overcome the lack of a dependable quarterback.

Nebraska hasn’t had much more luck in that area in recent years, but Rhule will hope to be able to land a quarterback he can count on in recruiting as he tries to rebuild the Cornhusker football program.