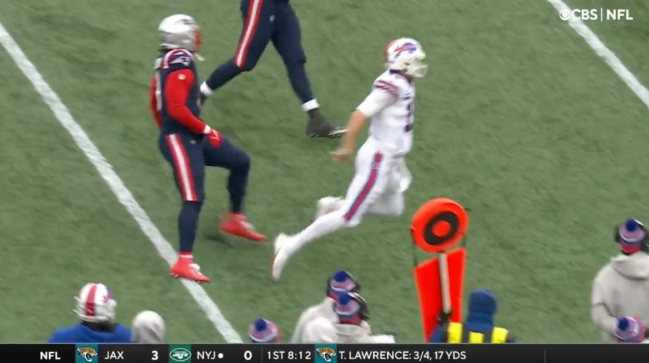 Patriots linebacker Matthew Judon is an absolute animal. He is having a great season as a pass rusher and is a crucial part of the New England defense.

During Sunday’s game against the Bills, however, he has caused some controversy.

Early in the first quarter, Buffalo quarterback Josh Allen led a 13-play, 61-yard drive to open the scoring. While in the red zone, Allen rolled to his right and threw off-balance to Isaiah McKenzie. Judon was in pursuit.

As Allen tried to regain his balance on the end of the play, he came into contact with Judon. Allen’s left foot landed awkwardly on Judon’s left foot, which had been extended in the Bills quarterback’s direction.

In turn, Allen tripped and went flying to the turf. It appeared to be an unintentional collision, but Judon reached his leg out at the end of the play and showed no concern after Allen hit the turf.

Because of the bang-bang nature of the play, it was hard to tell exactly what happened. Did Judon accidentally get in Allen’s space? Was it an intentional move to try and give Allen a hard time or maybe even take him out of the game?

Did Matthew Judon mean to trip Josh Allen here? or was it unintentional?pic.twitter.com/0n5j0xE2pd

Judon hurt a few plays later. I think the universe decided for us

I believe it’s an accident

Arguments were made on both sides, but Bills fans were very clear in their belief that Judon did it on purpose.

Matthew Judon is a punk bitch