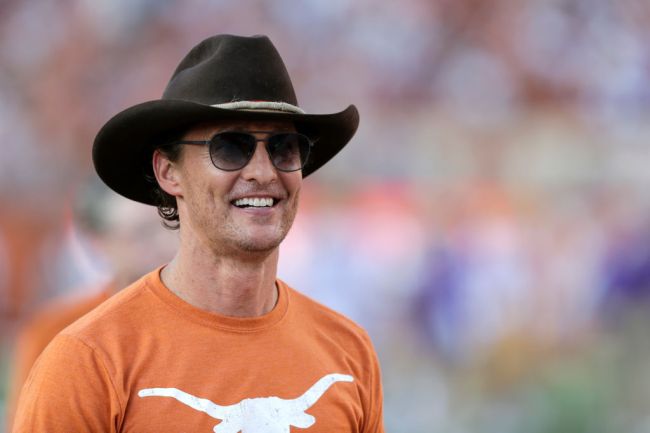 Gamblers Anonymous does not have a sense of humor, even if it involves Matthew McConaughey. The 51-year-old recently joined The Justin Moore Podcast from an airstream trailer somewhere to talk country music, college football, and everything in between.

While chatting with Moore, McConaughey told a hilarious story from 2010. As a noted University of Texas fan, he made a bet with his good friend and country singer Jamey Johnson, a University of Alabama fan. Colt McCoy and the Longhorns were squaring off with Mark Ingram and the Crimson Tide in the 2009 BCS National Championship game, and the two decided on a wager where the loser had to make a donation to a charity of the winner’s choice.

Johnson, who McConaughey says has “a hell of a sense of humor,” chose Gamblers Anonymous as his charity. Hilarious.

Well, Nick Saban’s squad went on to win 37-21 and bring Tuscaloosa the first of six National Championships in the last 12 years. Thus, McConaughey was to be the one dropping some dough in form of a donation to Gamblers Anonymous.

There was only one problem. The charity did not see the humor. Gamblers Anonymous refused to accept the donation from McConaughey and turned down the money.

“They didn’t get the joke,” he says on the Podcast. “We thought they would have a better sense of humor than that.”

Gamblers Anonymous turning down a (likely significant) donation from Matthew McConaughey is unexpected, but it makes sense, I guess.

Texas and Alabama have not played since that game, so Johnson owns the series between the two 1-0. However, the Longhorns (will they be back?!) and Tide are scheduled to play a home-and-home in 2022 and 2023. While it won’t have the same stakes as a national championship game, it will allow McConaughey to settle the score.

You can find the full story and interview here:

Also on the podcast, they discuss the time when McConaughey starred in Johnson’s music video for his song “Playing The Part,” dressed in a gorilla suit.

The behind-the-scenes video of the coolest man on the planet gearing up in a gorilla suit to dance alongside Johnson is pretty hilarious.

Both guys have a great sense of humor, so it will be funny to see what the wager is when their two college teams meet next year.