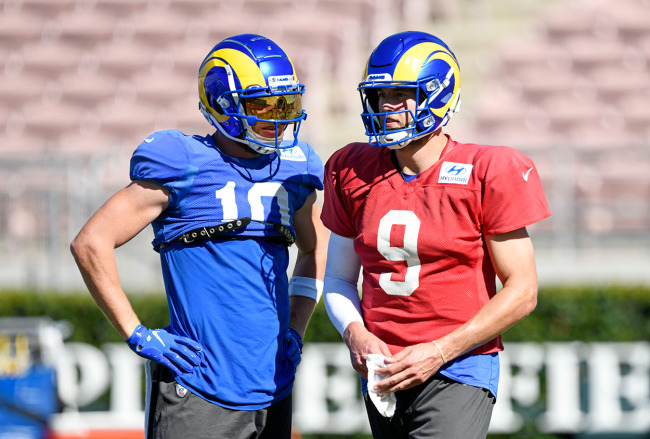 Cooper Kupp is not Calvin Johnson, but Matthew Stafford thinks just as highly of his top target in Los Angeles. The reigning Super Bowl winning quarterback was talking about his time with the Rams during training camp over the weekend and accidentally gave him the highest praise possible.

For the first 12 years of his career, Stafford was in Detroit with the Lions. For seven of those years, Stafford had the luxury of throwing deep and hoping that Johnson was down there somewhere. And most of the time, he was.

During his time as Stafford’s top target in Michigan, Johnson had only one season with less than 1,000 yards receiving, it came during his quarterback’s rookie season, and he was only 16 yards away. Over the next six years, Johnson went on to record career-highs in catches and yards en route to three First-Team All-Pro selections and six Pro Bowl selections.

After abruptly retiring in 2015, Johnson was elected into the Pro Football Hall of Fame in his first year eligible. Megatron is one of the greatest receivers to ever do it.

When Johnson retired, Stafford was left with a significant void at receiver. Until he moved to Los Angeles.

Kupp was the NFL’s leading receiver in catches, yards and touchdowns. Stafford had the best receiver in the NFL at his disposal.

As a result, it apparently felt a lot like the early years of his time in Detroit. While talking about his favorite throw from his first year with the Rams, Stafford referred to his new top target as his old top target.