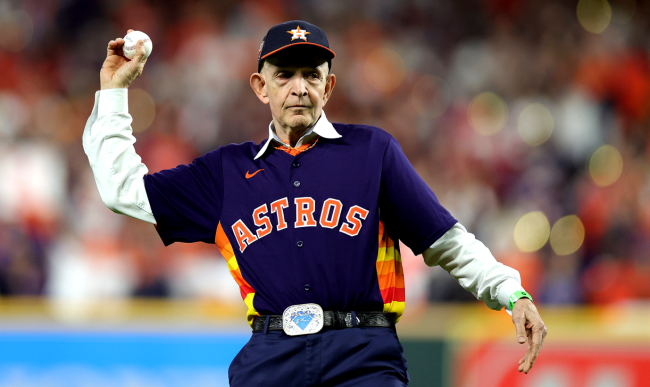 The legend that is “Mattress Mack” just continues to grow.

71 year-old Houston businessman Jim McIngvale has made himself famous by gambling millions of dollars on sporting events over the years.

McIngvale makes these outrageous bets as part of promotions he runs for his Gallery Furniture retail chain.

The promotions always involve him having to refund money to all of his customers for the year if a certain team wins.

To offset his potential losses, McIngvale bets these large sums of money on that team so that if they do win he has all of the refunds covered by the winnings.

Among his many high profile bets are $13 million on the Astros to win the World Series in 2019, $9.5 million on the Bengals to win Super Bowl LVI, and $6.2 million on Alabama to beat Georgia in the 2022 College Football Playoff National Championship.

McIngvale is reportedly worth around $300 million, so the fact that he headed into the 2022 World Series down around $20 million didn’t hurt him as bad as it would most people.

However, after wagering another $10 million on the Houston Astros to win it all, “Mattress Mack” is now up over $47 million after cashing in his winning tickets for a mind-boggling $75 million.

So, if you have ever wondered what $75 million in cash looks like, well, we can’t show you that, but you can certainly visualize it when you see “Mattress Mack” using a wheelbarrow to load $10 million in cash onto a private jet.

Good cause mans gonna need that wheelbarrow to carry around the balls it takes to make that bet.

“This money is HEAVY!” McIngvale said while carting his stacks of cash to the plane.

“You would think a wire transfer would make a lot more sense,” one person commented on Twitter.

“Who wants a transfer… when u can stunt wit a wagon and bags of cash…” someone else responded correctly.

The rest of the comments on the video of Mack hauling his cash were just as entertaining.

Need Mack to recreate this pic.twitter.com/mBuQZOaoeO

“He has heard of a WIRE transfer right?” another person asked.

“I’m sure, but wire transfers don’t do much for the photo op,” someone, again, replied appropriately.

We found his bed pic.twitter.com/MP2NOj8y29