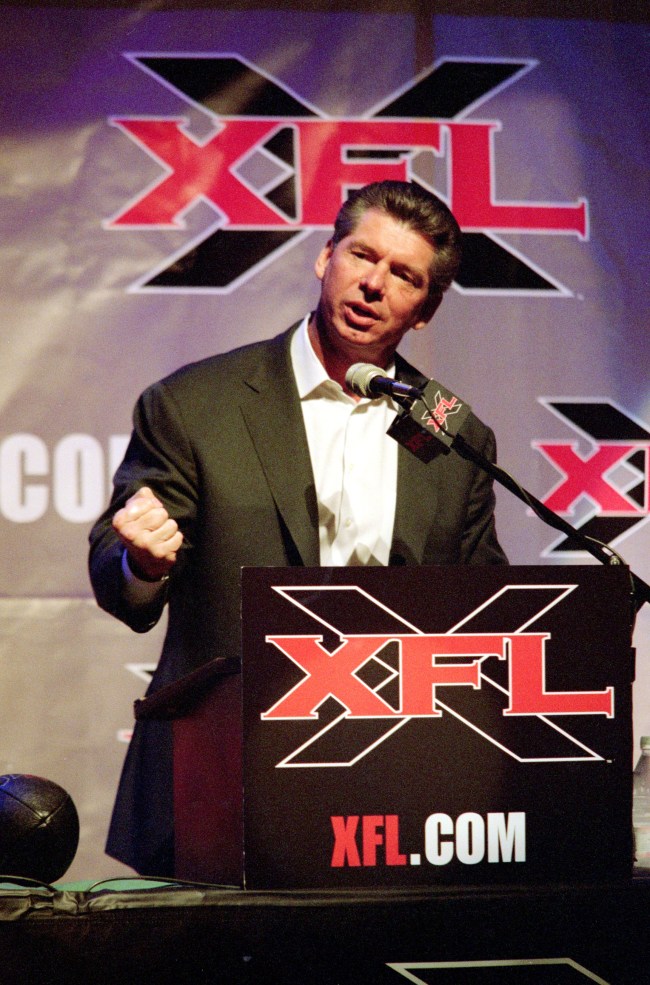 The XFL is returning in January 2020 with 8 league-owned teams, a 10-week regular season (plus a 4-team playoff) and none of the gimmicks (i.e. no fair catch) that the league was associated with during its 2001 iteration. McMahon is hoping shorter games (2 hours) and more wholesome players (i.e. without a criminal past, DUI included) and simplified rules (did you know leaping is banned on field goals in the NFL?) will win fans over. Few details of the league have been released (i.e. cities, team names, player salary structure etc.), but McMahon has promised the games will not be a platform for social and political statements and the XFL will not be a developmental league for NFL talent. The NFL has chosen not to comment on the announcement.

Howie Long-Short: This is a $100 million venture personally financed by Vince McMahon (he recently sold 3.5 million shares to fund it), not the WWE, and McMahon was clear there will be no crossover between the league and WWE talent; but that didn’t stop investors from bumping the stock up 2% following the press conference. Shares closed on Wednesday at $34.13, the first time the stock has ever closed above $34. The stock is up more than 50% since October.

Fan Marino: When you consider McMahon’s statement, “we have two years to really get this right”, you begin to realize it isn’t a coincidence the league is starting in 2020. The public line will be that the extra time will give teams a chance to gel and it will result in a better on field product; but, the NFL CBA expires following the 2020 season. Should a strike or lockout occur, McMahon is going to try and sign top-tier NFL talent to provide his league with some credibility. It’s a long-shot, but he has the money to gamble with and knows there is a $14 billion pot of gold (NFL revenue in ’17) on the other side if he can pull it off.

Las Vegas Sands Corp. (LVS) has announced that their joint venture with the Madison Square Garden Company (MSG) to build an 18,500-seat arena in Las Vegas, is on track begin this summer. The new venue, to be built behind the Venetian and Palazzo properties (on Sands Ave. between Koval Ln. & Manhattan St.), is scheduled to be completed by the summer of 2020. The venue will reside less than 2 miles from T-Mobile Arena; a newly built 17,500-seat arena that opened in 2016 and the current home to the Golden Knights (NHL).

Howie Long-Short: Sands Corp. owns both the Venetian and Palazzo properties, so the location is logical. It seems excessive, but as Sands Corp. CEO Robert Goldstein explained, “the growth is returning around Las Vegas. The Golden Knights have done extraordinarily well, football is coming; why not?” Many would reason because there is no potential pro sports tenant to place in the building, but Las Vegas is unique in that shows (as opposed to teams) can anchor venues; so, despite the Oak View Group’s participation in this project, no promise exists to bring an NBA team to Sin City.

Fan Marino: Speaking of new sporting venues, the Atlanta Falcons offered the cheapest concession prices in the league ($2 hot dogs, water and pretzels) at Mercedes-Benz Stadium this past season and saw sales (not revenue, as reported elsewhere) increase 53% YOY. Fans came earlier, stayed longer and bought more (16% more per fan) to help offset the reduced markup. While the team didn’t generate as much from concessions as it did the year prior, the Falcons were at the top of the league in fan satisfaction for food and beverages. That’s enough for team owner Arthur Blank, who said “we believe that the direction we’ve taken, given all the other positive benefits, is the bigger revenue play.” No one leaves a sporting event feeling good that they paid $11 for a pretzel and a bottle of water; here’s to hoping the new arena in Vegas (and others around the country) follow Blank’s lead and begin to provide fans a better gameday experience.

The WWE celebrated the 25th anniversary of Monday Night Raw on Monday night, with dozens of WWE legends including Shawn Michaels (link to JWS interview with HBK), Stone Cold Steve Austin and the Undertaker participating in the celebration. Just prior to the conclusion of the show, the Balor Club defeated The Revival; celebrating the win in ring with a reunited Degeneration X (must watch). JWS met up with Finn Balor, the leader of the Balor Club and one of the WWE’s biggest stars, at Manhattan Center and got the chance to ask him about his rise from the indie circuit to the WWE and his favorite NFL team (hint: they are playing in the Super Bowl).

Editor Note: The 2018 Royal Rumble PPV event is Sunday evening. Finn Balor is competing in the 30-man Royal Rumble match. WWE.com is offering a 2-month free trial of the WWE Network, for fans interested in watching the event.

JWS: Do you get nostalgic about being in the ring with the guys you grew up watching?

Finn: Yeah, it’s still pretty surreal. Just seeing Shawn Waltman (X-Pac), Scott Hall (Razor Ramon), backstage; Billy Gunn, Road Dogg, it’s really cool. I’ve been fortunate to have gotten to meet and work with most of these guys during my career and to learn from them; especially since I came to NXT and WWE, and it never gets old.

JWS: You spent a lot of time on the indie circuit before making it to the WWE. How has the lifestyle changed?

Finn: Coming up on the indie circuit you’re wrestling in community halls, churches, warehouse basements and old theatres, now we’re wrestling at Madison Square Garden (MSG) and stadiums but the lifestyle is the exact same because no one that is in WWE is doing this for the money. Obviously, that’s a benefit but we’re all doing this because it’s our passion. You wouldn’t get here (WWE), if you were strictly doing it for the money. It took me 16 years to get here and I wasn’t making any money (along the way). There was no incentive to go out there and perform for the money. You had to go out there and perform because it’s an addiction.

Howie Long-Short: The transition from the Attitude Era (the Degeneration-X tagline was suck-it!) to the family/female friendly product the WWE sells today (the Balor Club tagline is too sweet!), has made the company particularly attractive to advertisers. 70 new brands have signed on since the start of 2015 and corporate sponsorships grew 29% YOY in 2017. It’s not just the demographic that is appealing though, the audience numbers are impressive too. RAW averages 3 million viewers/week. For comparison purposes, ESPN/ABC & TNT (i.e. national broadcasts) are averaging 2.2 million viewers per NBA game this season.

Fan Marino: I read Finn was a Patriots fan, so I had to ask if that was fact or internet rumor?

Finn: Actually, I heard something about Tom Brady having hand surgery to apply a 6th finger for a 6th ring on his left hand? It is true, Matt Bloom (best known as Prince Albert) converted me.

Editor Note: On Sunday evening (January 28, 9p EST), former Ravens Pro-Bowl Running Back Justin Forsett will be on ABC’s Shark Tank to pitch ShowerPill; an active care company he founded with a pair of college (Cal) teammates. JWS spoke to Justin about The Body Wipe product, back in November. You can read the interview, here.