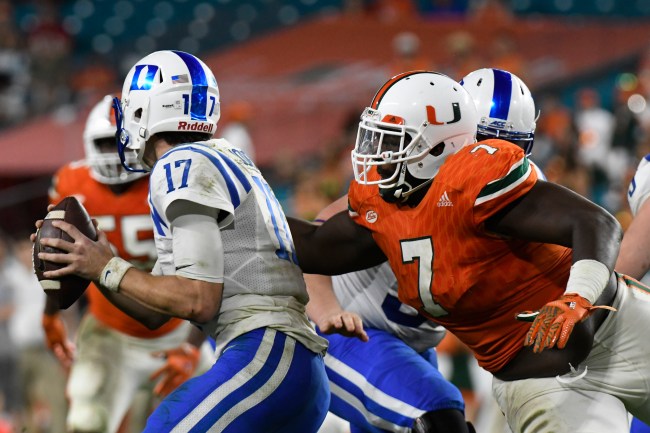 Some terrible news is coming out of Miami this morning. Miami Dolphins defensive tackle and former University of Miami standout Kendrick Norton was involved in a serious rollover car incident where he reportedly suffered a catastrophic arm injury.

I’m told Kendrick Norton suffered “a catastrophic” arm injury. He will not play football in 2019 and probably not again. https://t.co/vUqk3DPMjp

Miami-Dade Fire Rescue crews responded to the scene along the westbound lanes of the Dolphin Expressway at State Road 826 just after 2:30 a.m., Thursday.

Fire officials said Norton and a woman were transported to Jackson Memorial Hospital following the rollover crash, one as a trauma alert and the other in unknown condition.

The 22-year-old football player is well known to the South Florida community for his time playing for the University of Miami.

According to Dolphins insider Andy Slater Norton had to have his arm amputated at the scene of the accident.

Terrible news: #Dolphins DT Kendrick Norton was in a car accident last night and doctors amputated his arm, sources say. Other details are not yet available. But he is still at the hospital.

While Norton may never play football again his injuries are considered non-life threatening.

The Miami Dolphins have released a statement.

We were made aware this morning of a serious car accident involving Kendrick Norton. Our thoughts and prayers are with Kendrick and his family during this time.

With sadness, I can confirm that Kendrick Norton was in a car accident last night and suffered multiple injuries, including the amputation of his arm. We ask that you continue to pray for him. His family also asks that the public respect Kendrick’s privacy.