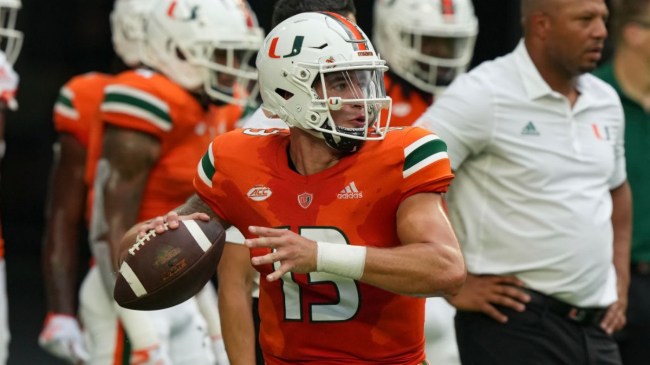 It appears a new head coach and a solid start to their season wasn’t enough for Miami’s football fans to show up to a home game against Middle Tennessee State.

A picture taken at the game shows a whole lot of empty seats at Hard Rock Stadium.

The decision to schedule Middle Tennessee State certainly didn’t help attendance here for the Hurricanes. The Blue Raiders are 2-1 this season, but they lost to an FCS James Madison team and their two wins have come against Colorado State and Tennessee State.

Meanwhile, Miami has also gotten off to a 2-1 start in their first season under Mario Cristobal, but has looked good enough to get themselves a spot in the nation’s top 25. They managed to hold the 25th spot despite suffering their first loss of the season last week, falling on the road against Texas A&M.

It seems that despite putting up a good fight against A&M, fans were not interested in showing up for this matchup. So far, the fans who stayed home have to be feeling good about that decision.

The game has not gone anywhere near according to plan for the Hurricanes. In the first quarter, they were outscored 17-3 by the Blue Raiders. Things weren’t going much better for most of the 2nd quarter. Middle Tennessee scored first in the quarter and held a 24-3 lead deep into the half.

The Hurricanes were finally able to find the end zone late in the quarter to get back into the game, but they still have a lot of work to do in the second half to avoid a shocking upset.

If they can’t find a way to win this one, their stadium could be pretty empty when North Carolina comes to town in a couple of weeks.