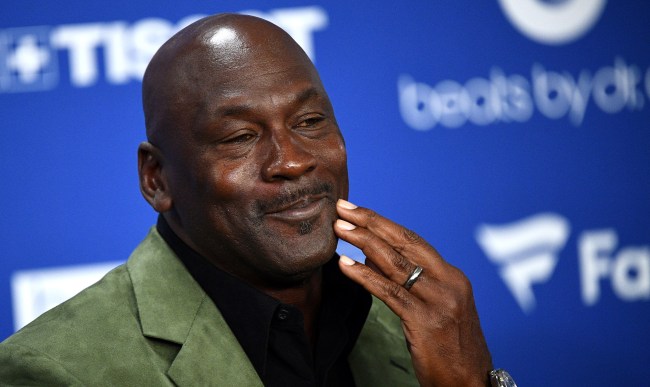 You know who has a pretty good life? Michael Jordan.

But we already knew that, didn’t we?

It’s good to be the GOAT.

And never was this more evident than this week down at the Big Rock Blue Marlin Fishing Tournament in Morehead City, North Carolina.

That’s because MJ and his giant 80-foot Viking boat named the “Catch 23” showed up at the Morehead City Yacht Basin Monday morning as MJ and his crew are participating in the 62nd annual tournament.

I can confirm Catch 23 is at the Morehead City Yacht Basin – across the dock from Boat Peggy pic.twitter.com/f54axEvdnY

🛥Yessirrr🎣 He caught some mahi-mahi on Memorial Day that his chef then prepared for dinner 👨‍🍳🍽
🗣FUEGO🔥 #CATCH23🐆 https://t.co/UQ9YtWQ2k8

The tournament along North Carolina’s Crystal Coast is one of the oldest and largest fishing tournament in the United States and boasts a purse of $3,343,975.

How many bets do you think MJ will be making this week?

No ‘Catch 22’ about ‘Catch 23’ because it looks like Michael Jordan is partaking in this year’s @BigRockFishing Tournament! According to the official Big Rock website, his boat is in fact registered. The tournament starts Monday. pic.twitter.com/RS4IXN2lu4

According to Inside Carolina, Jordan took a private jet to Beaufort, N.C. and spent some time there and in and Morehead City before the heading over to the tournament.

According to Haulover Inlet, Jordan’s boat, the Catch 23, is trimmed with the same elephant print that is synonymous with the Air Jordan 3 sneakers (so is his plane) and was also entered in the 2019 Ocean City, Maryland White Marlin Open.

If you’re interested in keeping up with how Jordan and his Catch 23 crew are doing in this year’s Big Rock Blue Marlin Fishing Tournament you can kep tabs on him here and here with real time updates.

MJ and his crew have already snagged a 442 pound marlin, but The GOAT being The GOAT, says he wants to do even better.

"I’d love to be back with a little bit bigger fish," Jordan said in the post-catch interview. pic.twitter.com/51hQTbF1KG