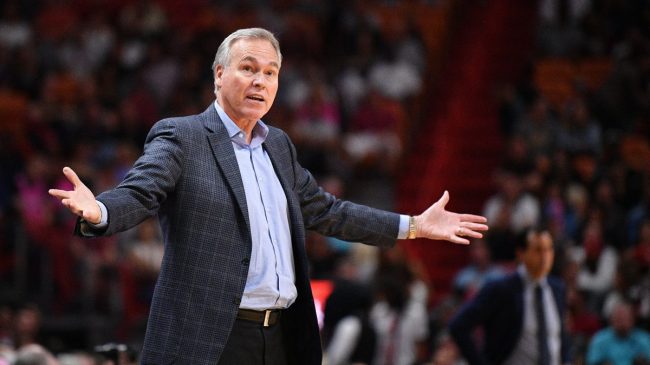 The Charlotte Hornets are in the midst of a coaching search.

The team fired head coach James Borrego in April following a 43-39 campaign last year. Under Borrego’s lead, the Hornets failed to make a postseason appearance. Three of his four seasons ended in sub .500 performances, with the coach posting 138-163 overall record.

Now, it appears that Charlotte could be zeroing in on one of the most decorated coaches of this era.

Adrian Wojnarowski reports that Michael Jordan is set to meet with Mike D’Antoni this week. He will follow Golden State assistant Kenny Atkinson, who’s in line to meet with the franchise on Tuesday.

Both have already run through the interview process with the Hornets, so it looks like this could be the final step in the search process.

D’Antoni certainly has the advantage in the experience department. The 71-year-old has spent 16 seasons in the NBA as a head coach, seeing stints with the Nuggets, Suns, Knicks, Lakers, and Rockets.

In that time, he’s won 672 regular season games, notched 10 playoff appearances, and twice been named Coach of the Year. Those accolades could go far in Charlotte, where the team is hoping to make its first postseason appearance since 2016.

News of Jordan’s meeting with D’Antoni is grabbing hold of the NBA world.

Fans react to Mike D’Antoni’s meeting with the Hornets

There are mixed reviews on D’Antoni’s interview. Many would like to see the head coach in Charlotte as he’s been successful in the past. They believe that LaMelo Ball could thrive in his system.

Do you want to see LaMelo Ball in Mike D’Antoni’s offense? #Hornets https://t.co/L58bpaNW54

Others, though, are skeptical. They note his rocky relationships with former players as well as his inability to win a championship.

i love MDA but former players do not, i prefer to see these hornets get out and run https://t.co/v6jCLimeG3

Mike D'Antoni hasn't reached the finals with the last five teams he's coached, but maybe the sixth time will be different 🙄

We’ll see if Jordan and the Hornets pull the trigger on D’Antoni or if they choose to go in a different direction.