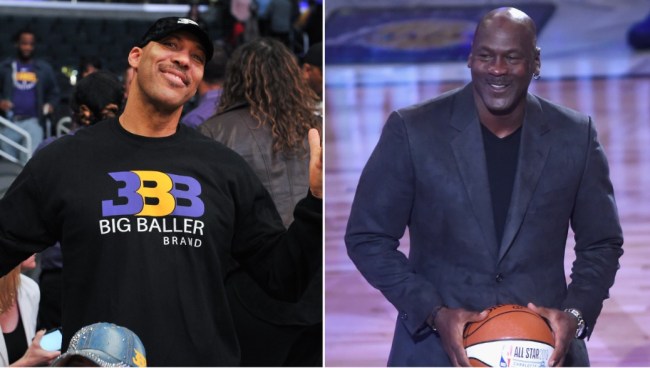 We might finally get to see LaVar Ball take on Michael Jordan in a game of one-on-one.

On Wednesday night, LaMelo Ball was picked third in the NBA draft by the Charlotte Hornets.

LaMelo getting drafted by the Hornets is interesting considering his father has said in the past he could beat team owner Michael Jordan in a game of one-on-one several times.

Remember when LaVar said this about MJ? 😂

“Back in my heyday, I would kill Michael Jordan one-on-one,” said Ball, the 49-year-old basketball dad who is 6-6 and 270 pounds and has a mouth to match his size. The elder Ball has spent his time touting his son as the next big thing in outrageous fashion (see: Curry comments) and trading verbal jabs with TNT analyst and ex-NBA star Charles Barkley.”
…
“I would just back (Jordan) in and lift him off the ground and call a foul every time he fouls me when I do a jump hook to the right or the left,” Ball said. “He cannot stop me one-on-one. He better make every shot ’cause he can’t go around me. He’s not fast enough. And he can only make so many shots outside before I make every bucket under the rim.”

Of course NBA fans immediately made LaVar Ball vs Michael Jordan jokes after LaMelo was drafted by the Hornets.

please lord let a mic'd up LaVar Ball sit next to Michael Jordan at some point.

LaVar Ball: "Back in my heyday, I would kill Michael Jordan one-on-one"

Michael Jordan during the draft: pic.twitter.com/8JSglaCotp

Did MJ draft LaMelo just to force LaVar to play him 1 on 1 so he could obliterate him? Feels like a Jordan move

When Jordan meets Lavar Ball for the first time pic.twitter.com/ELd34Dn95n

Michael Jordan remembering that Lavar Ball said he can beat him one on one after drafting LaMelo: pic.twitter.com/ismz4KJ6TI

When Jordan and Lavar finally have their game of one on one in Charlotte pic.twitter.com/QhXIv6XDXs

Charlotte selects LaMelo Ball and Michael Jordan be waiting for Lavar Ball, after he said he would beat MJ 1-on-1, like ⬇️⬇️⬇️ #NBADraft pic.twitter.com/NxogdcoPVB