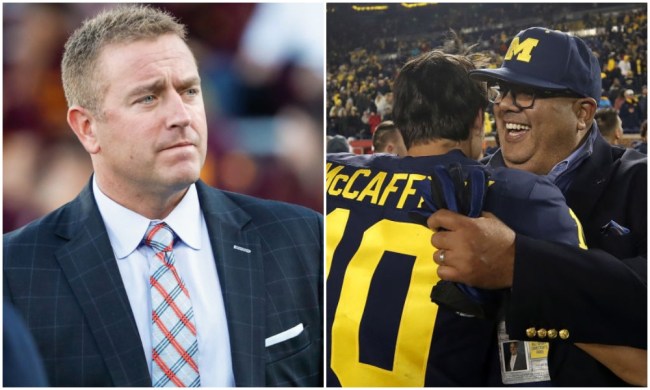 Kirk Herbstreit gave his opinionated prediction during a segment on ESPN earlier in the week about the Michigan – Ohio State game coming up. In other words, Herbstreit was doing what he is paid to do, but what he said ruffled the feathers of folks in Ann Arbor, even Michigan athletic director Warde Manuel voiced his frustrations calling Herbstreit a fool.

Herbstreit made waves during the College Football Rankings show on Tuesday suggesting the Wolverines could duck the Buckeyes.

“I still think Michigan waves the white flag and potentially avoids playing Ohio State next week,” Herbstreit said. “Michigan could opt out, basically, of that game, and keep Ohio State out of six games to qualify for the Big Ten championship.”

Michigan is an abysmal 2-4 while the Buckeyes are gunning for a CFB Playoff spot at 4-0 on the year. Suggesting that Michigan could figure out a way to avoid that game, a game it hasn’t won in eight years, isn’t all that crazy. Nevertheless, Herbstreit immediately jumped on Twitter to apologize for, again, doing his job and creating a conversation.

Michigan’s AD was asked about Herbstreit’s comments on Wednesday and addressed them head-on.

“I think it’s ridiculous,” Manuel said, according to NY Post. “I have to pause because my words, the anger … I was infuriated by the insinuation that Michigan would do anything other than play a football game.

“To insinuate that, to say something other than that, is a statement by a fool.”

Manuel’s comment came just as Michigan had to cancel its game against Maryland on Saturday due to rising COVID-19 cases within the program. That game’s cancelation certainly puts ‘The Game’ scheduled for next Saturday in jeopardy.

What it looks like right now is that Herbstreit may have been ahead of the curve. Perhaps he knew about Michigan’s struggles with the virus therefore he said what he said which is that he wouldn’t be surprised if the Wolverines avoid the game. Whether they ‘avoid’ the game or the game is canceled, we’ll see, hopefully the game is played next weekend, but Herbstreit’s comments certainly weren’t foolish.

It’s understandable that Manuel is frustrated, hell we all are right now, but Herbstreit appeared to have had some sort of crystal ball as he was ahead of the Maryland game cancelation news and could be spot on with his prediction for the Ohio State game as well.