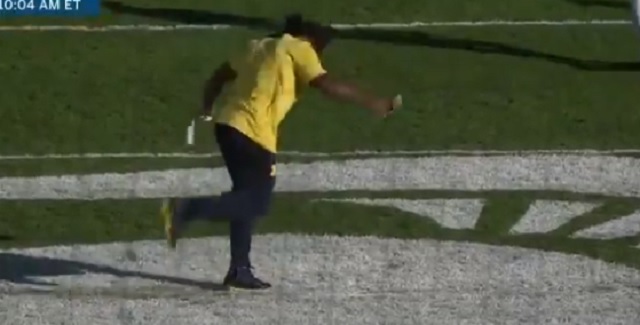 Today the Michigan Wolverines play their rivals Michigan State in a huge game that has CFB playoff implications.

“It’s a rivalry, in-state, big game, and it’s treated it as such,” Harbaugh said. “We want to play our best. We want to play hard, we want to play smart. I’ve been impressed with our team in those two regards. We are playing really hard and really smart.”

It didn’t take long for the rivalry game to live up to it’s name as both teams got heated during the pregame warmups.

Devin Bush had to be restrained by Michigan personnel pregame, after MSU players walked through him and other teammates on the field.

He followed up by leaving marks with his cleats on the Spartan logo at midfield.

Apparently Michigan linebacker Devin Bush was so fired up that he started kicking the MSU midfield logo with his cleats.

Update: It seems like Bush was made that MSU players ‘clotheslined” during warmups.