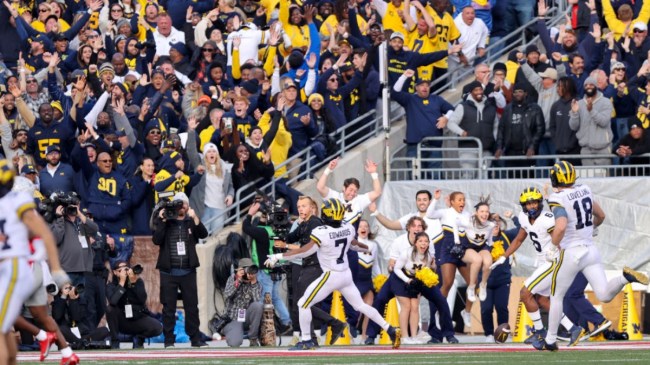 After going through this football season with an unblemished record, they entered today still having to answer questions about just how good they were because of a weak schedule.

Today they answered those questions. The Wolverines went into Columbus and left no doubt about where they stand in the college football hierarchy with a 45-23 win over Ohio State.

After the game, they decided to make sure that Ohio State and their fans had no doubts about were this rivalry currently stands.

Following the dominant victory the Michigan Wolverines’ players planted their flag on the Ohio State logo at midfield.

Ohio State fans won’t be happy to see their biggest rivals doing this, but Michigan had already planted their flan on the Buckeyes’ home field with their play in the past two matchup between these teams.

Michigan hasn’t just beaten Ohio State in back to back season. They’ve dominated the Buckeyes.

Last year, the Wolverines controlled the game from start to finish and absolutely dominated the Buckeyes on the ground. Michigan racked up 299 yards on 39 carries in that game on the way to a 42-27 win.

This season it was 254 yards on 33 carries and they added a few long passes to absolutely shred an Ohio State defense that had been among the best in the country coming into this game.The fact that they beat the Buckeyes by 3 touchdowns in their home stadium made the planting of the flag more of a formality than anything.

Michigan had already taken full control of this rivalry after years of being beaten by the Buckeyes over and over again.

Now Ohio State will have to wait another year to get their revenge and try to prove that the tide of this rivalry hasn’t completely shifted.