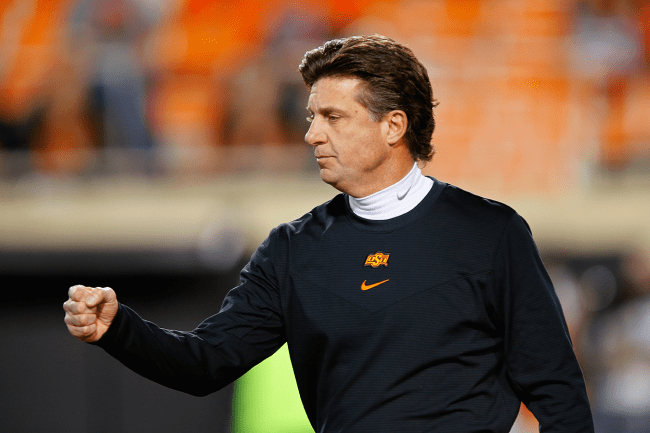 Oklahoma State head coach Mike Gundy is one of the biggest characters in college football. Whenever he is around, something bizarre is about to happen and his most recent press conference was no exception.

Gundy, who has been the head coach of the Cowboys since 2005, is feeling pretty good about how his fall camp has gone so far. As a result, he is in an even better, more excitable mood than usual. And that says a lot, considering that he is known for his passion and energy.

His ‘I’m a man’ rant is one of the greatest of all-time in any sport.

This time, on Thursday morning, Gundy was not fired up for negative reasons. He was fired up to showcase his ability to do one-armed push-ups.

Earlier this summer, a video surfaced from the Oklahoma State practice facility that showed a shirtless Gundy, at 55 years old, cranking out some reps during the dog days of summer in Stillwater.

On Thursday, a reporter told Gundy that he tried to do a one-arm push-up but was unable to do so and asked the head coach about how he does it. In turn, Gundy went on a tangent and explained that it is not about strength, but about weight distribution— although there is certainly an element of strength involved.

He then got down on the ground and showed exactly how to bang them out. Gundy also gave the reporter who posed the question a hard time for his lack of knowledge on the ‘Rocky’ movies.

Mike Gundy shares with me his secret to doing one-armed push-ups and gives a demonstration.

FOOTBALL IS BACK. If Gundy’s one-armed push-ups don’t make you want to run through a wall, check your pulse.