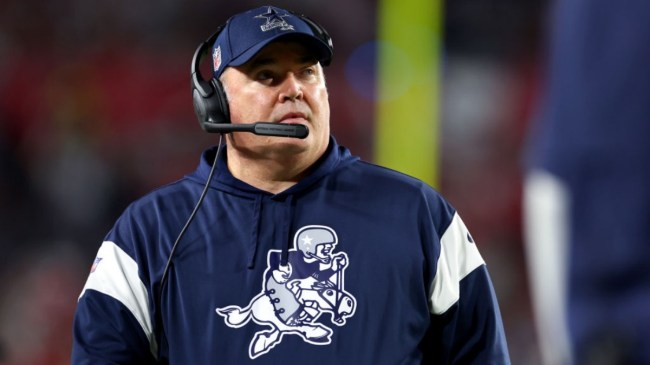 However, it wasn’t the type of history the Cowboys would have like to see themselves making.

Despite winning the game 31-14 on the road, there was one player who was far from his best in the win.

That player was kicker Brett Maher.

The Cowboys scored 5 touchdowns in the game, giving Maher 5 chances to convert a PAT. He missed 4 of them, breaking the previous NFL record of 3 missed extra points in a single game.

After the game, many expected the Cowboys to replace Maher following such an awful performance.

They didn’t replace him, but they did bring in some reinforcements. Yesterday, the Cowboys signed Tristan Vizcaino to their practice squad.

The @dallascowboys signed K Tristan Vizcaino to the practice squad on Wednesday.

Today, head coach Mike McCarthy hilariously tried to make excuses for the signing and claimed that it had nothing to do with their trust in Maher.

Mike McCarthy on Cowboys adding kicker Tristan Vizcaino to practice squad: "It doesn't take anything away from our trust in Brett. It's part of the responsibility. … We just wanted to make sure we're in position to add depth to our roster."

The Cowboys would not have brought in another kicker after that game if they were still completely confident in Brett Maher.

That doesn’t mean that Vizcaino will be replacing him in their next game, but it could mean that he can’t afford to have another bad game.

Maher has reportedly been kicking well in practice this week and had no issues during the regular season. He made 29 of 32 field goals and 50 of 53 extra points before the game against the Buccaneers.

The Cowboys will be hoping he can return to form this weekend as they try to upset the 49ers in San Francisco.