Mike Tyson Says He Smoked A Joint Before His Fight With Roy Jones Jr. 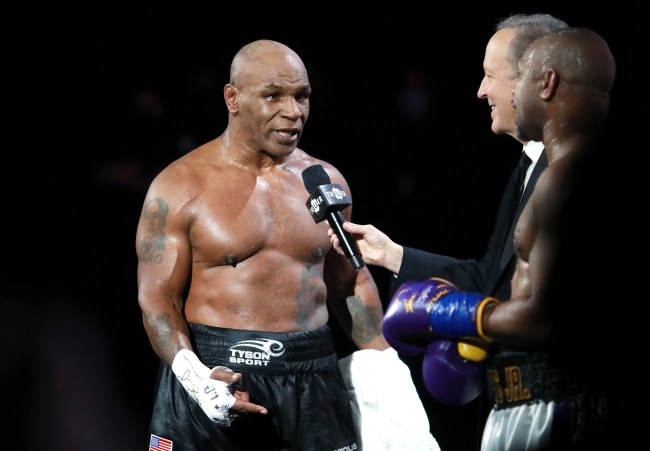 54-year-old Mike Tyson returned to the boxing ring for the first time in over 15 years, and he was apparently carrying a nice buzz while doing it.

On Saturday night, Tyson went eight rounds with 51-year-old former champion Roy Jones Jr. in an exhibition fight that was ruled a draw by the unofficial judges at ringside.

#TysonJones is scored a draw! 👀

Mike Tyson agrees.
Roy Jones Jr not so much… 😂 pic.twitter.com/XgwOyyQx3W

After the fight, Tyson, who has been a vocal advocate for the legalization of marijuana over the years, revealed to the media that he had smoked a joint before and after his fight against Jones.

“Absolutely, yes,” he said during his post-fight press conference.

“Listen, I can’t stop smoking,” he said. “I smoked during fights. I just have to smoke, I’m sorry. I’m a smoker. … I smoke everyday. I never stopped smoking.”
“It’s just who I am,’’ he said. “It has no effect on me from a negative standpoint. It’s just what I do and how I am and how I’m going to die. There’s no explanation. There’s no beginning, there’s no end.”

Did the marijuana help numb the pain Saturday night?

Thankfully, marijuana was not on the list of banned substances for the fight and the Voluntary Anti-Doping Association only tested the fighters for performance-enhancing drugs prior to the bout.