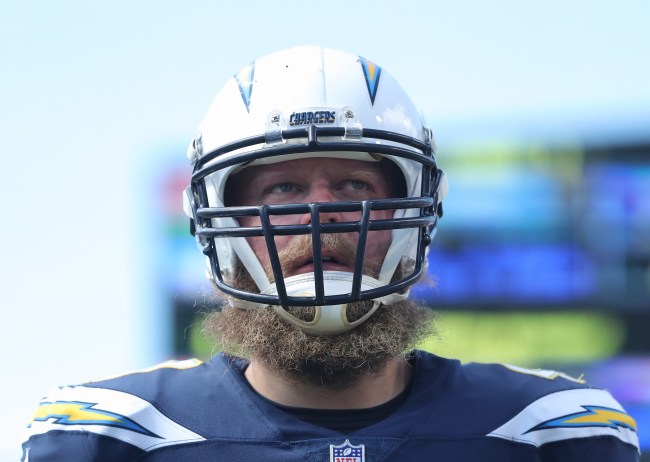 Mike Windt had a very bad day yesterday, guys — and it all got played out for everyone who watched the most recent episode of Hard Knocks to see.

In episode 3 of the Hard Knocks series following the Oakland Raiders, head coach Jon Gruden was seen poking fun at film of Mike Windt for a play that happened in a preseason game a couple weeks ago between the Los Angeles Chargers and the Arizona Cardinals. In the play, the Chargers’ Cardale Jones was tackled to the ground, but the ball had popped loose. Although Jones was clearly down by contact, the refs never blew the whistle, which resulted in the Cardinals’ defense scooping it up and returning it for a touchdown — which, after review, was called back.

Sadly, in the middle of the play, Windt, who clearly thought Jones was, in fact, tackled, can be seen walking onto the field in the middle of the live play, and instantly freaking out by just dropping the ball he had in his hands to the turf. That led to some criticism from Gruden on Hard Knocks, which showed the entire Raiders team laughing at Windt’s mental mistake. Take a look below.

He was the subject of ridicule by Jon Gruden and the Oakland @Raiders on Hard Knocks that was aired on the same day. pic.twitter.com/PuFP7bvKbK

As if that wasn’t bad enough, here’s where things get really bad for Mike Windt: In addition to being the butt of the joke of an entire NFL team, the Chargers released the nine-year veteran long snapper, which came within hours of the airing of the Hard Knocks episode. There are whammies, and then there are double whammies — with this one worthy of the latter.

Due to Windt’s mental blunder during the play, the Chargers were assessed a penalty, even though the play was actually ruled dead after refs looked at the replay. Who knows if the Chargers actually released Mike Windt because of the brain fart he had during the Cardinals game or not, or if he was just having a bad training camp and they thought they’d upgrade the position? And, although we may never know the answer to that question, you’ve got to feel for the dude for being ridiculed publicly for a mistake that, just maybe, led to him losing his NFL job, too.