WATCH: Mina Kimes Laughed Off An Awkward Moment After Getting Caught In The Booth 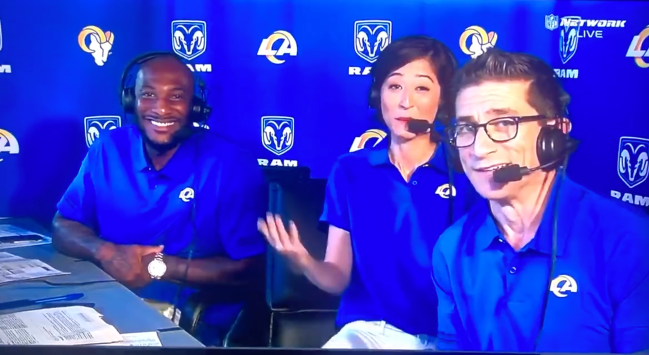 Nobody knows how to laugh at themselves better than Mina Kimes. She consistently finds herself in awkward situations like she did on Saturday and always shrugs it off.

While you can typically find Kimes on set at ESPN, she is a woman of many talents and also calls preseason games for the Los Angeles Rams. Her added value in the booth is immense and she knows the heck out of the sport.

However, beyond her astute in-game analysis, she provided one of the funniest moments of the evening. Early in the third quarter of the Rams’ game against the Chargers, the broadcast cut back to the booth.

The sudden switch surprised play-by-play man Andrew Siciliano and former NFL cornerback Aquib Talib, but Kimes was completely off guard. She was in the middle of re-adjusting in her seat when the camera focused on the broadcast team.

Kimes joked about the moment on-air. It didn’t make it any less awkward, in fact, it made for an uncomfortable pause before Siciliano pivoted the conversation.

Fortunately, Kimes doesn’t care and cracked a joke about the moment on Twitter.

my brain: just don’t embarrass yourself in front of Aqib Talib

The 35-year-old Yale graduate was hired by the Rams in 2019 for preseason games so she’s had experience in the booth prior to Saturday. Her, Talib and Siciliano are one of the most entertaining broadcast teams in the country.

Los Angeles is back in action on Saturday at 10:00pm ET and Kimes will be back in the booth.