This Minnesota Walk-On Was Surprised With A Scholarship In Epic, Emotional Fashion 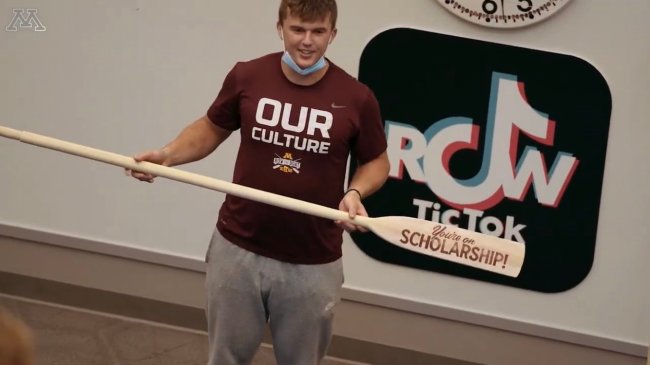 Derik LeCaptain couldn’t hold back tears after finding out he is on scholarship for the 2021 college football season. LeCaptain, a redshirt sophomore at the University of Minnesota, received the news during a team meeting earlier this week.

Gophers’ head coach P.J. Fleck pulled off the epic, emotional surprise. He is known for his saying “Row The Boat,” meaning that when you have a choice between giving up or moving forward, you continue to row the boat forward.

Playing off of his saying, he called players up one by one to read messages on the backside of oars. Some of Minnesota’s star players were called up, including quarterback Tanner Morgan and running back Mo Ibrahim.

And then LeCaptain, a lesser-known special teams standout and backup linebacker, was called to grab an oar. When he picked up the oar and turned it over, his message read “you’re on scholarship.”

LeCaptain, a now-former walk-on who was the spring game MVP, was speechless as his teammates erupted in cheers and then mobbed him in the middle of the room. When Fleck addressed his newly-awarded scholarship player, LeCaptain rubbed tears from his eyes and thanked his coach for taking a chance on him.

It was quite the moment and his mom couldn’t believe the news when he called.

Fleck has become quite good at this. In the past, dating back to his time at Western Michigan, the 40-year-old coach has used an easter egg hunt, onside kicks, and even celebrity appearances from Sylvester Stallone to surprise his players with scholarships.

It never gets old.