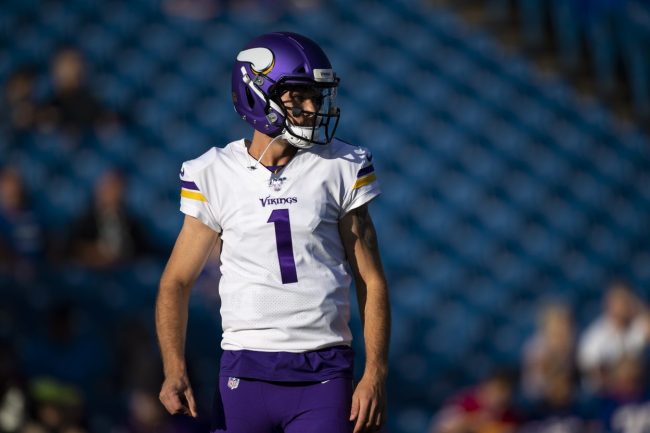 Five-year NFL veteran quarterback Kyle Sloter is set to cash a nice pay day for six days of work last week. The 27-year-old was signed to the Vikings’ 53-man roster on December 28th and was released on Monday.

In the process, Sloter reportedly received one game check worth $51,111. He spent six days on the active roster, but was inactive on Sunday night.

For coming in for six days of being on the active roster before being waived today, former #Vikings QB Kyle Sloter got one game check worth $51,111. He was inactive Sunday night at Green Bay.

By earning his game check last week, Sloter earned more than the average annual salary in the United States in the process. 2021 data indicated that the weekly median wage in the U.S. is $990, which comes out to $47,520 per year.

Backup quarterback Sean Mannion landed on the Reserve/COVID-19 list on December 27th. Sloter was signed to be the team’s third-string quarterback on the 28th behind Cousins and rookie Kellen Mond.

Then Cousins was placed on the Reserve/COVID-19 list last Friday, but Mannion was able to return to play. As a result, Sloter was the third string behind Mannion and Mond.

Prior to Sunday’s game at Green Bay, Sloter was ruled inactive.

With Cousins coming back this week, Mannion already back, and Mond having never been inactive, there is no room for Sloter. Thus, he was let go on Monday.

By getting six days of action leading up to the game, Minnesota is on the hook to pay him out. And now, after less than a week of work, he is cashing in.

Backup quarterback continues to be the best job in the world.