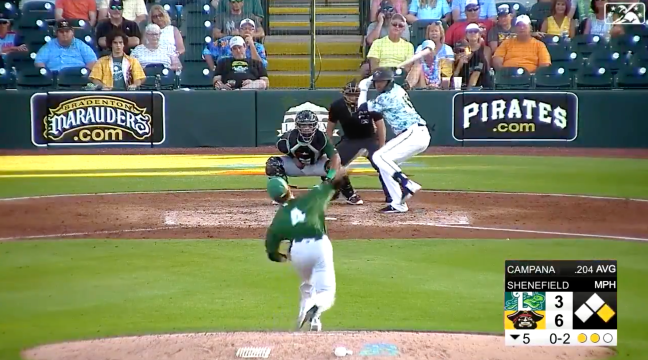 Minor League baseball is a grind, but there are countless prospects who would do anything for an opportunity. Hayden Shenefield is one of those guys.

The 6-foot-1 left-handed pitcher posted a 3.86 at California State University Northridge in 2018 and has been trying to get an MLB look since graduation. He recorded a 2.79 ERA in the Northwoods League that summer but the first year of his professional pursuit did not go well.

Shenefield spent the 2019 season on two different independent teams and posted a 6.84 ERA between the two stints. It was not super inspiring stuff from a Major League hopeful trying to continue his career.

After a rough start to pro baseball, he received the opportunity to turn things around with the New Jersey Jackals in 2020. And he did.

In 21 innings pitch, the 25-year-old allowed 13 hits and four runs. The 1.71 ERA in the Frontier League was nothing insignificant and he he was ready for his next chance to throw his cheese.

Last month, in May, Shenefield was scrolling on Reddit and stumbled across an Ask Me Anything (AMA) session. It was being hosted by Kyle Boddy, the director of pitching for the Reds. The session, named for what it is, allowed users to ask him anything, and he would answer certain questions.

Shenefield, rather than sticking to his script, stepped outside of the box and shot his shot. He decided to share his stuff with Boddy and actually received a reply.

Boddy liked what he saw. 38 days later, on Sunday, Shenefield made his debut for the Daytona Tortugas— Cincinnati’s Low-A Minor League affiliate. Not only did he get on the mound for an affiliated roster, but he shined in the relief appearance and thew 3.1 innings of scoreless ball.

Again, Minor League baseball is a grind. Shenefield has a long road from Low-A to the Bigs. However, he is living a dream, and it wouldn’t have happened at all without a risky Reddit reply.