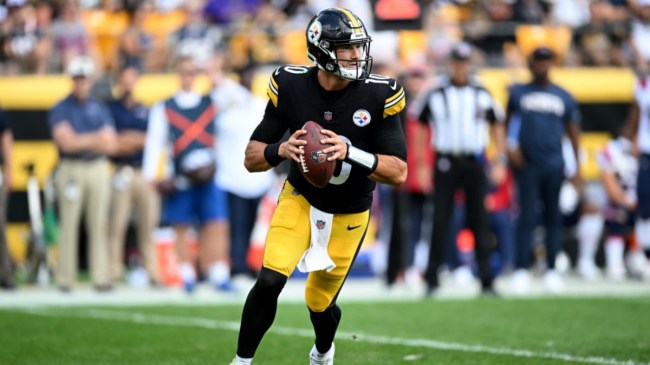 PITTSBURGH, PENNSYLVANIA - SEPTEMBER 18: Mitch Trubisky #10 of the Pittsburgh Steelers looks to pass during the first half in the game against the New England Patriots at Acrisure Stadium on September 18, 2022 in Pittsburgh, Pennsylvania. (Photo by Joe Sargent/Getty Images)

It only took a couple of weeks for the city of Pittsburgh to start turning on Mitch Trubisky. Like much of the football world, Pittsburgh Steelers fans haven’t been particularly impressed by Turbisky’s first 2 games with the team.

In Week 1, the Steelers went to Cincinnati and beat the Bengals, but did so mostly thanks to their defense. The offense only scored one touchdown in the game and added 3 field goals while Trubisky failed to reach 200 passing yards.

It got worse in Week 2. The Steelers hosted the Patriots in their second game and suffered a disappointing 17-14 loss with the offense once again only able to find the end zone once. Against the Pats, Trubisky only threw for 168 yards with 1 touchdown and an interception.

After the loss, one Steelers player voiced his concerns about the offense. George Pickens revealed that he feels like he is open and that the ball should be getting to him more.

George Pickens says he feels as if all the WRs are getting open pic.twitter.com/Qrvi3Ln5bz

I feel like everybody is, too. It’s not just me. They’re getting to the right spots as well… It’s just gonna take time.

Today, Trubisky responded to Pickens’ comments, revealing that he agrees with the idea that he needs to get the ball to Pickens more.

Mitch Trubisky sees it, too: George Pickens — 6 targets, 3 catches, 26 yards — has to get more involved in the offense.

"I think I could look for 14 more often. He's doing a great job for us, and I've just got to get these playmakers the football." https://t.co/ruOJs91HSC

After an impressive preseason, Pickens has barely been involved in the Steelers offense to start the regular season. Pickens has only been targeted 5 times in his first 2 games, turning those targets into a pair of catches for 26 yards.

If the Steelers’ offense is going to be successful this season, Mitch Trubisky needs to get the most he can out of the many weapons the Steelers have around him. Pickens is definitely one that Trubisky should be utilizing more right now.