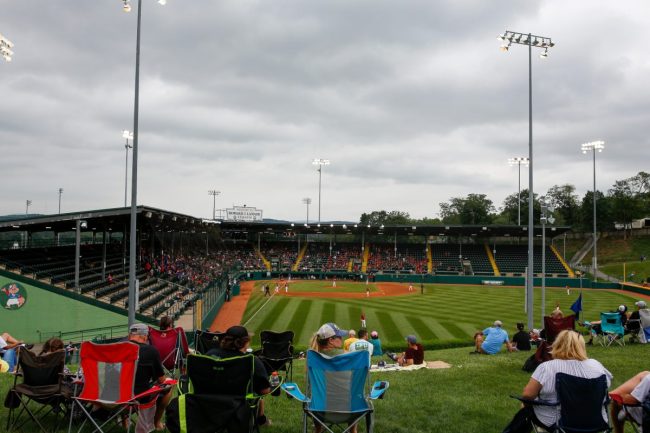 A baseball fan has done the research to figure out one important question. Who would be among the MLB’s home run leaders if every game were played in a Little League park?

With the Little League World Series coming up, Ryan Domingues figured out how many dingers would’ve been hit by Major League players had they played at Williamsport all season long.

The LLWS is played at Howard J. Lamade Stadium, where the outfield fences sit 225 feet away from home plate. That was actually backed up 20 feet a few seasons ago as homers became more prevalent.

So, you can imagine the gawdy numbers that MLB players would see. We’re talking upwards of 200-250 homers per year. But while we know who this year’s top power hitters are, the players at the top of this list might surprise you.

Who would be the MLB’s home run leaders if every game were played at the LLWS?

Aaron Judge, who currently leads the majors with 46 homers, actually sits in fifth place with these new calculations. Maybe that’s because he already plays in a Little League park in the Bronx.

He was jumped by four players, only one of whom currently ranks in the top 10 among Major Leaguers in the category.

At the top of the list is Rangers’ infielder Marcus Semien, who would’ve bashed an insane 157 home runs to date. Right on his heels are Freddie Freeman (155) and Texas teammate Corey Seager (150). Jake Cronenworth, who’s only hit 11 home runs to date, would be in fourth, with Judge rounding out the top five.

Fans were quick to react to this data, and they quickly posted their reactions on social media.

Of course, Aaron Judge was an easy target.

That's why he dropped from a commanding 1st to 5th.

His number doesn’t jump as high because his park is already little league-ish so he only gets a slight bump compared to others who play in actual Major League sized stadiums.

Aaron Judge has the lowest discrepancy here, statistically proving that Yankee Stadium is the closest ballpark to an actual Little League field

Others asked what it would look like to see a pitcher throwing from 46 feet. Talk about some HEAT!

And could you imagine what the Rangers would look like if they had two of the MLB’s top three home run leaders in the lineup?

@Rangers just paid half a billion thinking they had LLWS dimensions.

Now, I want to find out who would be at the bottom of this list.