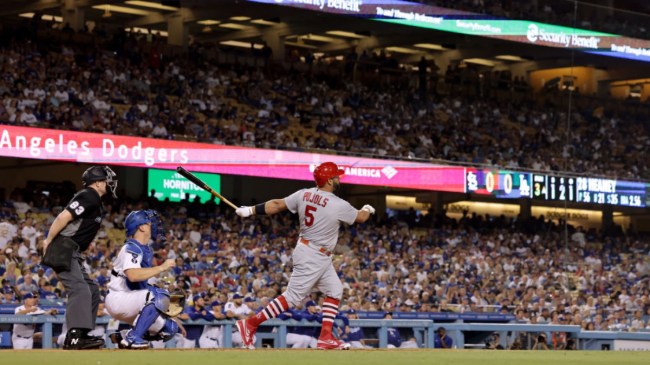 Baseball fans witnessed some home run history last night. While most fans were expecting Aaron Judge to creep closer to the AL home run title with a 61st home run, it was actually Albert Pujols who ended up working his way up a home run list.

Pujols entered last night’s game with 698 career home runs. He needed just 3 at-bats to get himself to 700.

He hit a 2-run shot in the 3rd inning for 699. Number 700 was a 3-run homer. The pair of home runs made Pujols just the 4th player in MLB history to reach the milestone.

The only thing wrong about the prediction was the pitcher Pujols hit the historic dinger off of. While Amsinger predicted Pujols would hit it off of Clayton Kershaw, the home run was actually given up by Andrew Heaney.

Pinpointing the game that far in advance is pretty impressive, especially when there were many who weren’t sure that Pujols would reach the milestone this season.

He entered the year needing 21 home runs, but only hit 17 in the previous season and hadn’t topped 20 since 2019. It wasn’t looking good at the end of July when he had only hit 7 all season.

However, Pujols really picked up the pace over the past couple of months, hitting 14 since the start of August. Pujols’ power came back just in time to make this wild prediction come true.