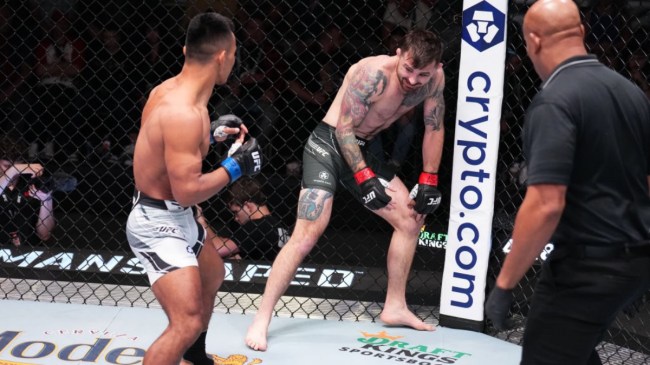 The UFC has had a huge injury issue recently. At UFC 280, TJ Dillashaw entered the co-main event knowing he had dislocated his shoulder and that it had popped out repeatedly during training camp. He let the ref know before the fight and took on Aljamain Sterling anyway. The shoulder popped out in round 1 and he was finished in round 2.

Last weekend, Phil Hawes and Calvin Kattar both suffered leg injuries that led to their losses, with Kattar’s loss coming in the main event.

This week, they had their biggest injury issue yet.

On today’s Fight Night card, Darrick Minner was scheduled to take on Shayilan Nuerdanbieke. Throughout the day today, the line had a major shift. Minner entered the day around a +200 underdog and moved to over +300.

It is rare for a fight to see that kind of movement on the day of a fight and fans took notice.

Time to find out whether Minner lost a limb since we saw him at the weigh ins.

Then the story took a really strange turn. Minner appeared to injure his leg while throwing a kick in round 1 and then made it worse with a 2nd kick. He was finished shortly after.

Minner losing because of an injury after that line movement has fans thinking somebody knew he was entering the fight with an injury and decided to take advantage of the info with some money on Nuerdanbieke.

Fuck beating around the bush, that was sketchy AF.

That was so sketch. Unprecedented line movement in a short amount of time and then Minner going down on like a random kick? I generally don’t believe in conspiracies but that was sketch.

These events came after the UFC had recently banned fighters and coaches from betting on fights.

Even members of the MMA media took note of the suspicious events that took place around this fight.

Minner suffers an injury seconds into the fight after throwing a kick.

I've pointed this out in recent weeks, situations like this are what the UFC are hoping to avoid when the institute a policy that forbids athletes and those close to them from wagering on UFC bouts. https://t.co/nt6Ayx5Ko6

We may never know for sure what caused the huge line movement today, but it definitely seems strange for the line to have made that big move before an injury led to Minner’s loss, especially after what happened with Dillashaw.