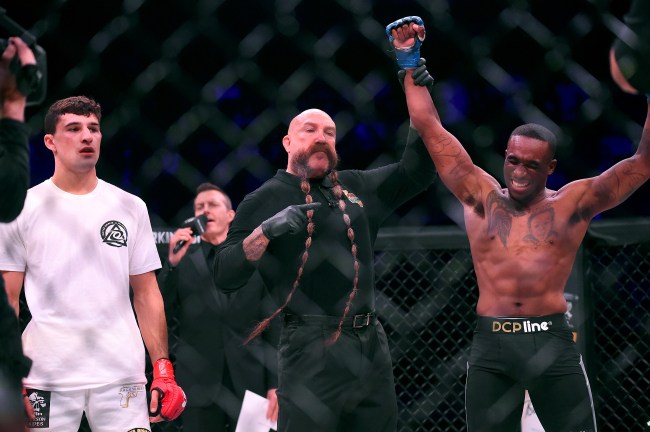 Veteran MMA referee Mike Beltran has one of the most impressive mustaches on the planet. If you were to pass him on the street you’d 100% think it was a beard because your brain wouldn’t ever allow you to think that what you’re seeing is a mustache because his mustache is more impressive than most facial that has been grown throughout human history.

Stuck at home like the rest of us, @referee_mike_beltran hopped on Instagram to demonstrate how he could turn his impressive mustache into personal protective equipment by folding it up like a sorcerer. Many cities are requiring people to wear masks in public now and it’s unclear if his ‘mustache mask’ would satisfy that requirement on a legal level but I see no reason to think this isn’t just as safe as some of the shit people are buying on Etsy right now.

Here’s his epic mustache along with the Instagram clip of him folding it up into a mask. This is what his ‘stache looks like on a normal day (braided up):

And here he is turning that mustcahio into a mask:

Well here it is. Enjoy the laugh and stay safe out there. Nothing wrong with a sense of humor and a laugh at my expense. Gracias pic.twitter.com/StB9pwLEfN

This dude’s been out here planning for this global health crisis all along while the rest of you jabronis were shaving. I say ‘you jabronis’ because I can go two weeks without shaving and still barely have a mustache. It’s pathetic. My facial hair game is not strong and there’s nothing I can do about it. Thankfully, I can grow some mean nose hair if I don’t trim it and that at least stops some virus particles from getting all up in my business.

Truly, this looks straight out of Pixar’s Brave. I’d expect this to be some sort of Disney/Pixar animation and not real-life but here we are.