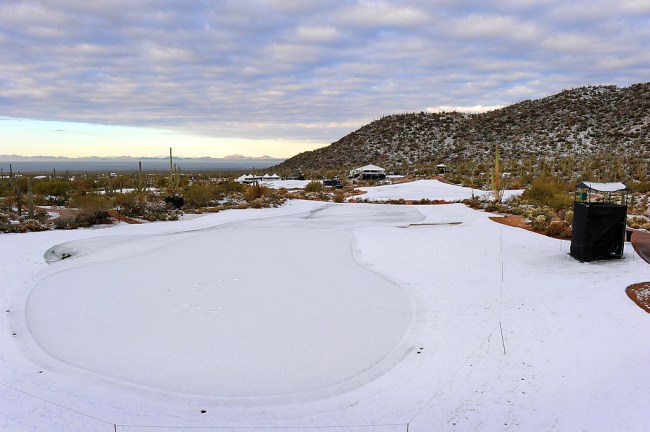 Playing golf in the snow – for some reason I’ve done it a few times – is one of the most miserable experiences you can have. Constantly moving the powder around to tee your ball up, get a lie in the fairway, etch out a line on the green; it’s just not fun.

People that do play golf in the snow usually do it for pleasure, with nothing on the line, but for these Montana high school golfers, they had to do so while battling for a state championship.

Depending on where you live, high school golf season is either in the spring or fall, but I guess if you live in Montana you never really know what you’re going to get.

The fairways don’t look too terrible, and they did get to wipe the snow away on the putting surfaces, but it still looks extremely difficult. This all looks fun yet absolutely miserable all at the same time.

As someone who played in four state championships (super humble brag, no big deal) nerves are a real thing. If you’re team qualified then you have them to worry about, not just yourself if you only qualified as an individual. But with this scenario, you’ve got to assume some of those nerves went out of the window because everyone is going to struggle mightily.

Well maybe for us folks not from Montana that is.

According to 406MTSports, the field improved by 240 strokes in the snow-covered second round compared to the normal conditioned opening round. Montana kids are just different, huh? Maybe the snow added some extra concentration, who knows?

Might have been even wilder for the boys leaders who finished about 15 minutes later. Here's Bozeman's Justus Verge playing his final hole. #mtscores pic.twitter.com/ahTY5xcgDa

Justus Verge won the Class AA State title with a two-day score of one-under with a one-over 73 amidst the snow.