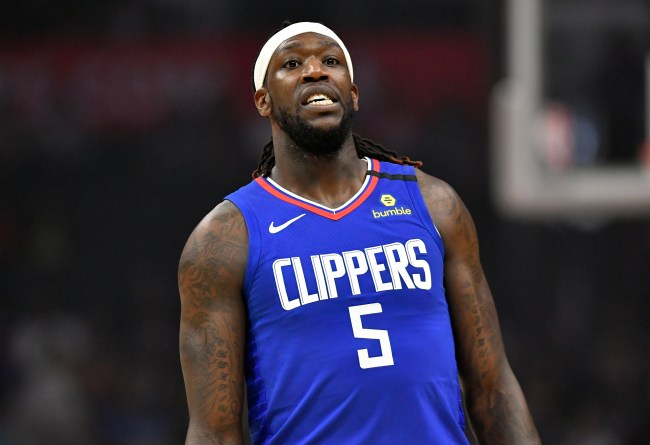 One of the biggest moves of this offseason featured former Clippers big man Montrezl Harrell signing with the Lakers over the weekend.

On Monday, Harrell met with the media, and he appeared to take some not-so subtle-shots at his former team when asked why he didn’t return with Clippers and instead decided to sign with the Lakers.

Reporter – “Did you feel like the Clippers wanted you back?”

Lakers’ Montrezl Harrell, after a long pause trying to find the words – “Apparently not if I’m on the other side.” pic.twitter.com/p9DbTKrajU

Montrezl Harrell on signing with the Lakers: "Honestly, it was a business decision. I felt it was the right decision for me. … I'm definitely going to be with a team that wanted me and with a group of guys I feel I'm going to gravitate well to and build chemistry fast."

Before signing with the Lakers it was reported that Harrell was involved in an altercation in the playoffs with then teammate Paul George on a team with many noted chemistry issues.

Early in the second quarter, a struggling George had committed two careless turnovers in less than a minute. The second mishap was a half-court pass to Harrell, who was near the paint but surrounded by Murray and Michael Porter Jr.

Murray picked off the pass. Seconds later, the Clippers called a timeout.

Harrell approached his teammate about the risky pass, with George not taking responsibility and arguing the pass could have been caught had Harrell made the right play, sources said.

This set off the NBA Sixth Man of the Year.

Harrell responded with something along the lines of, “You’re always right. Nobody can tell you nothing,” and expletives were uttered from both players, sources said. George eventually toned down his rhetoric, but a heated Harrell wasn’t having it. Teammates began clapping on the sideline, in part to disguise what was going on and in an attempt to defuse the situation. The incident deescalated shortly after as coach Doc Rivers took his seat to go over the game plan.

The Clippers-Lakers games could get pretty awkward when Harrell faces his former teammates next season.