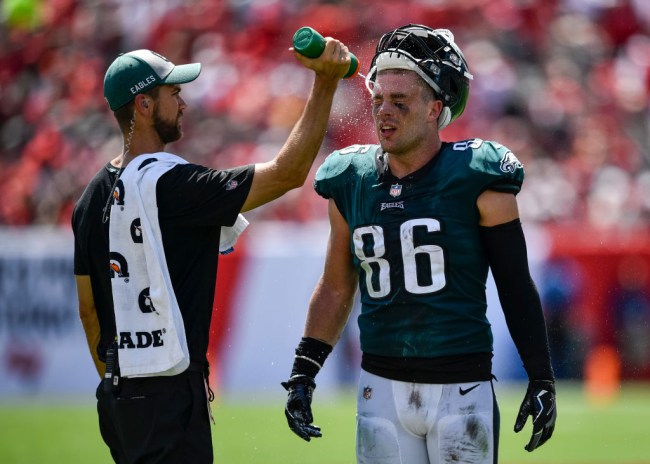 It can be kind of hard to process the ungodly sums of money teams are routinely willing to drop to secure the services of some of the world’s best athletes, and while the concept of getting paid hundreds of millions of dollars to play a sport can seem absurd at times, it’s just an example of the free market doing its thing, as every franchise that throws boatloads of cash at a player does so hoping they’ll help generate even more in revenue when everything is said and done.

After all, you’d be hardpressed to find any fans out there whose primary motivation for watching sports in the first place is anything other than getting to see the most insanely and freakishly talented athletes on the planet do their thing. Sure, there are probably some weirdos out there who care more about the coaches who dream up the gameplans than the players executing them but to say they’re in the vast majority would still be an understatement.

However, the sports world wouldn’t be able to go round without the help of people holding some much less prestigious positions but there are a few jobs in particular that are markedly more unrewarding than the rest.

When the people in those roles decide to take them on in the first place, they do so knowing they’re resigning themselves to an existence of perpetual underappreciation, with some of them agreeing to shoulder tedious labor and others willingly subjecting themselves to constant public scrutiny and ridicule directed their way by guys in La-Z-Boys proclaiming “I could do a better job” on an almost daily basis.

So, I think it’s time we tip our caps and raise our beers and give the people holding the most thankless jobs in sports some recognition they rarely get.

This gig comes with one of the best seats in the house but only at the price of potential self-esteem shattering embarrassment.

Based on what I’ve seen, I’d say 95% of their time on the clock is devoted to sitting on a stool while keeping a vigilant eye out for foul balls headed their way. Once that happens, they do what they can to make Tom Emanski proud and try to avoid a Bill Buckner by staying low, watching it into their glove, and tossing a souvenir into the crowd before the cycle begins anew.

Every once in a while, they’ll flash the leather and snag a line drive that was on a crash course with the skull of a small child and maybe even get a shoutout on SportsCenter but those moments are few and far between.

Much more common are the foul balls that can make even the most seasoned ballperson look like an ass in front of 40,000 people (unless you’re working for the Marlins) in the blink of an eye—a terrible sin that is still nowhere as grave as the worst one they can possibly commit: scooping up a ball that turns out to be in play.

I completely understand how this happens. They hear the crack of the bat and become laser-focused on web-gemming it up for the fans, but unbeknownst to them, the first base umpire signaled “fair ball.” The cameras then tighten in on them as the realization slowly crawls across their face that they done messed up this time.

They’ll also make an appearance on SportsCenter but only because they earned a spot in the “Not Top 10.”

A lot of people want to work in sports, which means you sometimes have to take what you can get, and sometimes the only thing you can get is a gig that results in you regularly cleaning up bodily fluids.

Still, it’s a really important job. Just think how dangerous an NBA game could get if there wasn’t a small army of people with towels on each baseline ready to hop on their hands and knees to clear the hardwood of millionaire sweat. It could turn into a way more dangerous (and saltier) Slip ‘N’ Slide.

And how gross would it be if standard operating procedure after a hockey player gets their face cracked open is to just let the blood chill on the ice for a couple of periods? Very. It would be very gross. That’s why a valiant shovel-wielding hero is needed to make a grand entrance through the Zamboni doors and start scooping up some hemoglobin.

It ain’t much, but it’s honest work.

The worst part of this job is probably having to deal with people bringing up the movie Waterboy whenever you reveal you’re a waterboy. “It’s so inaccurate. It’s honestly nothing like that. It’s almost disrespectful,” they tell anyone who brings it up in conversation.

However, it’s one of the most important jobs out there because—get this—without water, you can die. What’s even wilder is that you can die if you have too much water. Crazy, I know. That’s why waterboys have such an important job: helping athletes in achieving hydration equilibrium.

I don’t expect fans to thank these unsung heroes but maybe the players could every once in a while. My car thanks me more often when I put gas in it than football players thank the waterboy after an expertly delivered stream of ice-cold H2O right through the facemask with nary a drop out of place. Do you know how hard it is to achieve that kind of laminar flow in a gameday environment? The disrespect is truly palpable.

Even if there happens to be a case of catastrophic spillage, an elite waterboy comes prepared with a fresh bottle (that doesn’t contain the sports drink of the sponsor who paid to put their logo on it) slung over his shoulder just in case. It’s time we give these unsung heroes the props they deserve.

Referees and home plate umpires get their fair share of heat but the same can be said of their colleagues at less glamorous positions, who do a ton of grunt work while receiving a fraction of the time in the spotlight.

In hockey, you’ve got the linesmen playing second-fiddle to referees, who get cool orange armbands and the privilege to dish out penalties and make goal calls. What do the linesmen get to do? Call offsides and drop the puck—oh, and when a pair of 230-pound Saskatchewan farm boys decide to drop the gloves, they’re tasked with breaking things up and hoping they don’t have their jaw broken in the process.

In baseball, the man in blue behind the plate is calling hundreds of balls and strikes alone every game. His cohorts out in the field, on the other hand, don’t see as much action and all of the good calls they make can be overshadowed by a single blown one. The worst part? They don’t have the luxury of a mask to hide their shame. They just have to stand out there and take it.

Also, the guys in the field have to do a fair amount of running, and judging by the physique they generally possess, I’m sure they hate that part of the job but do it anyway like the true professionals they are.

By agreeing to become the commissioner of a major sports league, you’re signing up to be hated by owners, players, and fans alike. The sizeable paycheck that usually accompanies such a gig helps to take some of the sting out of it but I bet the occasional pat on the back and a “Keep up the good work, pal” would be much appreciated.

Think about how miserable being a fantasy football commissioner is. You kick off each season by trying to corral a bunch of drunk guys in a Buffalo Wild Wings just to get through the draft. Once that’s said and done, your year consists of keeping an eye on things so that the guy who worships at the altar of fantasy sports experts doesn’t fleece the guy who barely pays any attention by trading him a running back who blew out a knee and is done for the year.

You’re the fall guy for everything, including work stoppages, failed television deals, and facing off against one of the biggest players in the game in federal court after hitting him with a suspension based on some scientifically dubious claims concerning PSI. Even the league’s handling of social responsibilities and navigating a global pandemic rests on your shoulders.

It’s about as thankless of a job as there is in sports, but luckily, people are willing to bite the bullet and take a thorough booing at every league function for the greater good.