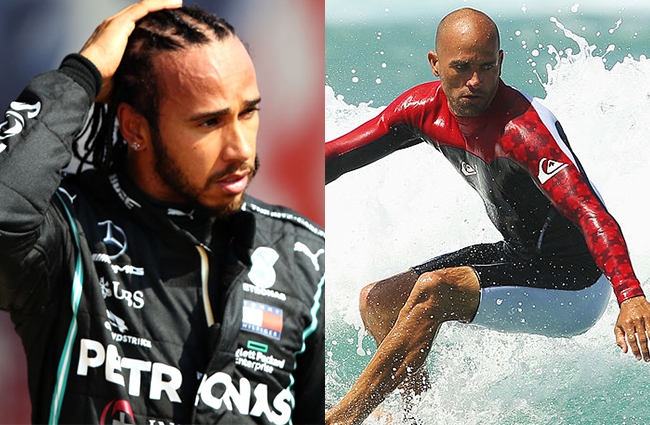 Over the years, there have been certain athletes who have dominated various sports on their way to securing a virtually unanimous reputation as the G.O.A.T.; people like Gretzky, Brady, and Jordan whose first name you don’t even have to mention when talking about them (although a certain guy with the surname “James” is giving that last one a run for his money).

However, there are plenty of others who have ruled their domain in a similar way who’ve largely ridden under the radar. For example, back in October, Formula One racer Lewis Hamilton secured the seventh Drivers’ Championship trophy of his career, a feat that was even more impressive when you consider it was pretty clear he was on pace to win it all the way back in July.

While I’m sure the “rAcE cAr DrIvErs ArEn’T rEaL aThLeTeS” crowd would disagree, you could make the argument that Hamilton is the most dominant competitor of his generation in any sport, but if you brought his name into that conversation with the vast majority of Americans, there’s a very good chance they wouldn’t even know who he was.

Hamilton is far from the only person who’s reigned supreme for years on end but largely failed to get the recognition they deserve, and as a result, I’d like to take some time to tip my cap to six athletes in particular who don’t get the amount of respect they objectively should.

Boxing is full of fighters who dominated the sport throughout their careers—Ali, Tyson, Mayweather—but unless you’re familiar with the barbershop scene from Coming to America, there’s a very good chance you’re unfamiliar with Rocky Marciano.

“The Brockton Blockbuster” had a career that spanned from 1947 to 1955 during a time when boxing was still one of America’s most popular sports, and to this day, he remains the only heavyweight championship to retire with an undefeated record, going 49-0 before hanging up the gloves (with 43 of those victories coming via knockout).

Marciano was known for his resilience, power, and a strong chin that could handle basically any punch it encountered and successfully defended his title six times before walking away from the sport at the age of 32. He would go on to pursue a successful career as a broadcaster before tragically dying in a plane crash in 1969, and while his legacy has lived on, he still remains incredibly overlooked compared to many of the boxers to rise to prominence since then.

I assume most people reading this don’t even know the difference between IndyCar and Formula One—just like they probably don’t know about the existence of Scott Dixon, who is far and away the most talented IndyCar driver of the modern era.

The New Zealander kicked off his professional career in 2003, and when his rookie season came to an end, he took home the first of the five championships he’s won on the back of 50 wins (including three victories at the Indianapolis 500) and the 118 podium appearances he’s made since he began competing in North America’s top open-wheel racing series.

That win total currently makes him the third-most successful IndyCar racer ever behind A.J. Foyt and Mario Andretti, the latter of whom is probably the only driver in this category most sports fans have at least heard of.

Dixon is still racing at the age of 40 but hasn’t slowed down one bit, as he clinched this year’s title during the final race of the season and remains a constant threat, whether he’s showcasing his talent on the oval or a road course. When you consider seven-time NASCAR Cup Series champ Jimmie Johnson will be joining him as a member of Chip Ganassi Racing during select races next year, he’ll have even more help when it comes to sustaining his impressive run.

Before Serena and Venus Williams took the tennis world by storm, there wasn’t really a debate concerning the most dominant woman to ever play the sport, as Martina Navratilova burst onto the scene by winning her first singles match at the age of 17 prior to defecting to the United States from the Country Formerly Known as Czechoslovakia and proceeding to set some mind-bending records—some of which still stand to this day.

At one point, she was ranked as the best singles player in the world for 332 consecutive weeks in addition to holding the distinction of the best doubles competitor for 237 (Steffi Graf would eventually break that first record but no one has surpassed Navratilova when it comes to the second).

Oh, and she also holds the record for the most tournament wins in both of those categories, as she racked up 167 on her own and 237 with the help of her various partners. As I alluded to, the Williams Sisters would eventually give her a run for her money, so while younger fans might not recognize Navratilova’s greatness, I can only hope this helps raise some awareness.

Collegiate wrestling isn’t exactly a sport that tends to dominate the headlines but what Cael Sanderson managed to achieve during his time at Iowa State deserved far more ink than it received.

Sanderson won four straight NCAA championships after securing his first one during his freshman year in 1999, but the manner in which he did so is truly stunning, as he went 159-0 as a member of the Cyclones. That achievement resulted in Sports Illustrated naming his run the second most impressive achievement in the history of college sports behind Jesse Owens, who broke four world records over the course of an hour at the 1935 Big Ten Track and Field Championship.

He’d continue his success after graduating, as he won a gold medal at the 2004 Summer Olympics in Athens. He eventually decided to give coaching a shot at his alma mater before taking his talents to Penn State in 2011, where he’s managed to guide the Nittany Lions to eight titles since taking the helm.

If you asked most people to name the first professional surfer to pop into their head, I feel like there’s a good chance a lot of them would stare blankly into space and say “Um” a bunch of times until admitting they couldn’t tell you a single one. If I had to guess, Kelly Slater would be the favorite when it comes to that particular thought experiment, but with that said, he’s still a huge underdog compared to “I’ve Got Nothing.”

Even if you’re familiar with the surfer, you might not understand just how skilled he was back in the day. He’s widely considered the G.O.A.T. thanks to the eleven World Surf League championships he took home between 1992 and 2011, the first of which (like Dixon) came during his rookie campaign, where he won the trophy at the age of 20 to become the youngest person to ever snag a title.

His profile eventually resulted in him landing a recurring role on Baywatch and he’s also dabbled in music in addition to using his profile to promote environmental awareness and suicide prevention, making him a “good dude” in every sense of the phrase.

I know I briefly mentioned Hamilton in the introduction but he’s earned a bit more of a deep dive thanks to what he’s accomplished over the years.

As I said, he won the 2020 championship and did so by staging a huge comeback at the Turkish Grand Prix, where he started in the sixth position after his worst qualifying session of the year before coming back to earn the checkered flag on a day when rain resulted in the track having about the same amount of traction as an ice rink.

This has been Hamilton’s M.O. his entire career: winning races when the odds are stacked heavily against him—like at this year’s British Grand Prix, where he blew a tire and still managed to guide his crippled car across the finish line for a victory.

He’s currently tied with the legendary Michael Schumacher for the most titles in Formula One history, and while he hasn’t officially signed a contract for next season, there’s little doubt he’ll ink a new deal with the Mercedes team and enter the season as the favorite to win it all yet again.