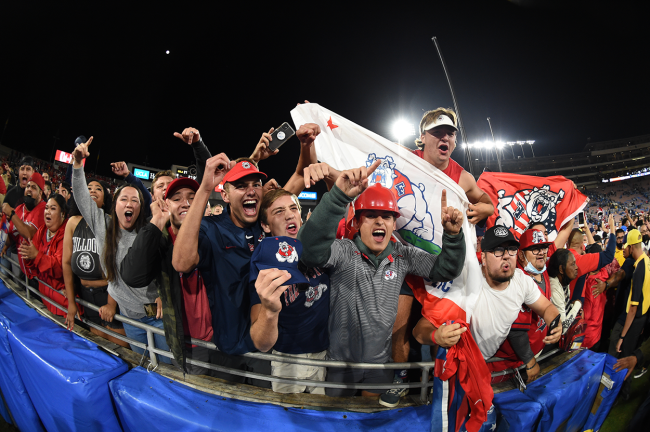 Fresno State football got absolutely pulverized by its rival on Saturday, losing to Boise State by 26. While the team got clobbered on the field, as did quite a few fans in the stands.

Multiple Bulldogs fans were arrested after a violent brawl broke out in the stands. Even security guards and police officers got caught in the crossfire.

In the end, five people were arrested, including a man who shoved am officer. It is unclear as to what will happen next or if additional arrests will be made, but it is clear that Fresno fans don’t know how to handle themselves.

For the first time in seven years, the Bulldogs were playing in front of a sellout crowd. The big fight in the stands, which happened in the northeast corner, broke out amongst the crowd of 41,043 right after halftime.

Fresno State was losing at the time and went on to lose by a lot.

At least three guys started throwing punches when a few fans without shirts joined in on the action. An older man with a beard, who was just watching things unfold, got caught in the crossfire and was kicked down a few rows.

Alternate angles showed the fans fall off out of the stands and onto the concrete concourse in front.

A fourth angle shows a better look at the absolute melee and all of its chaos. The parties involved were THROWING.

This, right here, is why Fresno State can’t have nice things. The Bulldogs get ranked in the Top 25, a massive fight breaks out in the stands, and they lose to their rivals. Tough.