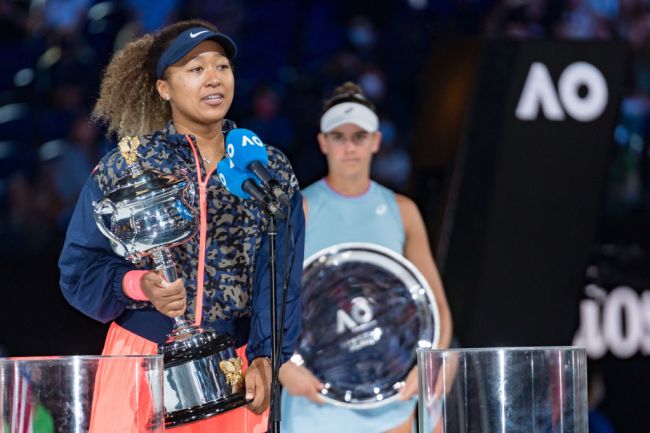 Naomi Osaka is perfect in Grand Slam finals. The 23-year-old was dominant in her 6-4, 6-3 Australian Open win over Jennifer Brady but she suffered a slip-up in the post-match interview. Before she launched into a series of thank-yous, Osaka turned over her shoulder to ask whether her opponent prefers to be called Jenny or Jennifer.

When Brady replied with her answer, the Japanese international turned back and thanked her with the wrong name. It was an awkward encounter that resulted in a hilarious, ruthless moment.

Osaka: “Do you like to be called Jenny or Jennifer?”

While it’s funnier to imagine that Osaka asked Brady’s preference so she could deliberately call her the opposite, she had good intentions and probably just made a mistake. She was incredibly praise-forward and congratulatory after making the blunder.

“We played in the semis of the U.S. Open a couple months ago and I told everyone that would listen that you’re going to be a problem, and I was right. For me, it’s really hard to play you. And to see your growth over the past few months is really cool to see. I know that you’re probably working very hard, so I want to congratulate your team over there as well. I know, for me, my team is like my family, so I’m sure you guys have a lot of really cool adventures together, so congratulations to you guys as well.”

Osaka came into the tournament as the No. 3 ranked women’s singles player in the world and will hope to reclaim the top spot with the win.