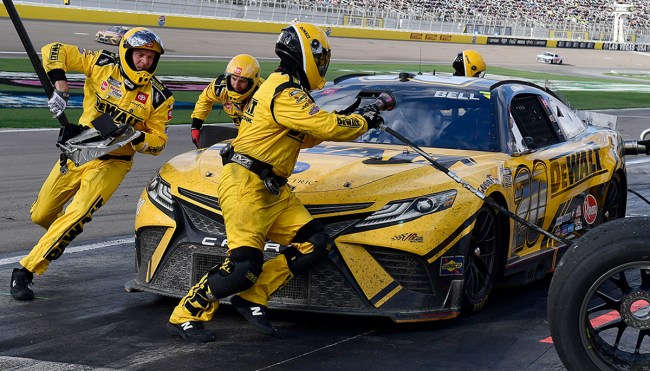 NASCAR drivers might get the bulk of the glory when it comes to how they perform on the track, but every single driver relies on a massive team of people who do most of their work behind the scenes in their pursuit of the checkered flag.

That includes the crew tasked with engaging in a veritable ballet whenever the car they’re maintaining makes its way down pit road, as the five people who are permitted to hop over the wall to change tires, top off the gas tank, and perform other vital tasks can save (or cost) their team valuable seconds over the course of a race.

Pit crews are normally able to perform their job with stunning ease to a point where its easy to take what they do for granted, and there’s an adage that’s frequently applied to referees and other officials that also extends to those guys: if people know your name, it’s usually because you did something wrong.

During Sunday’s NASCAR race at Atlanta Motor Speedway, Joe Gibbs Racing jackman David O’Dell was (arguably) the exception to that rule after managing to bounce back from a scary incident that unfolded when he was struck by the No. 20 car while Christopher Bell was making a pit stop when the race was under caution.

O’Dell didn’t let the fact that he was struck in the leg stop him from jacking up the car, although he was forced to sit out the remainder of the race after receiving medical treatment (he’s expected to return for the Circuit of The Americas next weekend).

What a legend. Wow. pic.twitter.com/I5Cjuq9oVO

Wow close call for our jackman under the last caution pic.twitter.com/ThAUlgZHI9