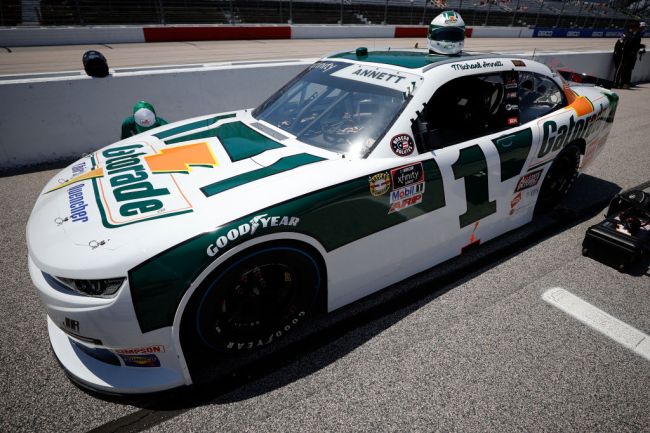 Darlington Raceway in South Carolina is one of the most historic tracks in the sport and its egg-shaped design makes for a unique look. Since 2015, NASCAR has held an annual “throwback weekend” at Darlington, where drivers and teams use old-school paint jobs to honor some of the most legendary drivers in history and their cars.

The results never disappoint and this year’s schemes are no exception. Here are some highlights:

NASCAR’s only active black driver is paying tribute to the first black driver to win in what is now the Cup Series.

Earnhardt will honor Dale Sr., his grandfather, with an awesome patriotic look.

His paint scheme resembles the car Dale drove in the 1996 All-Star Race, promoting the Olympics in Atlanta. pic.twitter.com/0lz39J1KW1

This is the most out-there and probably the most awesome. Graf is taking a different approach and threw it “Back to the Future.”

Music Credit: Back To The Future Soundtrack by Alan Silvestri pic.twitter.com/TfWMKaGIJ6

The No. 14 car will rep AJ Foyt, the best driver to every run that number.

This number carries the weight of legends. @ChaseBriscoe_14's AJ Foyt throwback dips deep into the history of our iconic number, paying homage to the heroes that drove it before him. #NASCARThrowback pic.twitter.com/qGUDnzrpCn

One of the more unique designs, Reddick is going to support some country music greats.

This one's for you, Margaret Haas. pic.twitter.com/We6IMgvC74

Jones will sport the colors that John Andretti, who passed away from cancer in January 2020, drove to a win at Martinsville in 199.

A special throwback to commemorate a special win, this one's for John 💙

Blaney is throwing it back to… himself? His scheme is inspired by a care he drove when he was 16.

This scheme brings back some memories for me and dad. Not the flashiest thing out there but that’s how I like it. @AdvanceAuto @TooToughToTame pic.twitter.com/ST6ye7yG9w

What a throwback.@WilliamByron is honoring Neil Bonnett – who would have turned 75 this year – with this @Valvoline paint scheme at @TooToughToTame. #NASCARThrowback pic.twitter.com/bigMDPexIo

This is one of the best. Annett is sporting Darrell Waltrip’s iconic Gatorade scheme in the Xfinity Series.

After winning this year’s Daytona 500, McDowell is donning Bill Elliott’s 1984 scheme from when he won the Daytona 500.

Berry is throwing it back to the other Dale Earnhardt— junior. This one is pretty special. Earnhardt Jr. sported this pain job during the 2001 Pepsi 400, where he won in his first return to Daytona since losing his father on the same track.

NEWS: @joshberry and @tirepros to carry special @DaleJr throwback colors on the No. 8 Chevrolet @TooToughToTame. pic.twitter.com/E9DEHECRPk

What can Brown do for you? Get it?

Here it is! Your first look at @brandonbrown_68’s throwback paint scheme for @TooToughToTame that gives a nod to @DaleJarrett’s 2002 UPS livery!📦

Tony Stewart owns this car, and it will don the scheme he drove to win the 1999 Rookie of the Year Award in the Cup Series.

Let's party like it's 1999. @rileyherbst is ready to throw it back to @TonyStewart's '99 rookie year classic. pic.twitter.com/nz4blVaHBU

Here are some other highlights of the weekend:

In commemoration of John Andretti, we've designed and sponsored a replica of his Ford Thunderbird RCA paint scheme in the Official Throwback Weekend of NASCAR at Darlington Raceway May 7-9. 🏎️💨 It's a replica of the paint scheme of the RCA car he raced in the 1990s. #NASCAR pic.twitter.com/BYHwmjDrdU

As a fellow Australian, I am proud to bring back Dick Johnson’s NASCAR scheme from 1989-‘90 at Darlington.

I grew up watching Dick racing his iconic #17 car during his illustrious career in V8 Supercars. Today my cousin, @will_davison, races the #17 car for Dick Johnson Racing. pic.twitter.com/azwvSaVTE6

A lot of guys on our team and I have some great memories with matte black cars, so we’re taking that and putting an @AutoOwnersIns spin on it for @TooToughToTame this year. #NASCARThrowback pic.twitter.com/wtdAxZbn3v