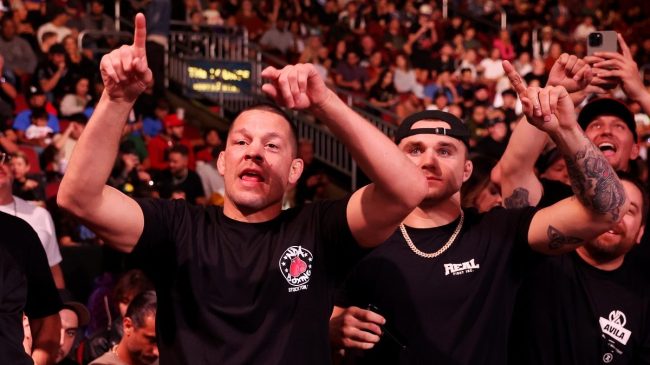 UFC 281 was a fantastic event as it truly delivered how everyone had hoped. However, there was some action outside of the arena as well. Apparently, Nate Diaz got in a little scuffle with Dillon Danis after delivering his infamous Stockton Slap.

The MMA Media shares a clip of the altercation. It’s unclear what is said, but Diaz was not pleased. Both UFC fighters wanted all the smoke, but luckily there were people keeping them separated.

Here is the scuffle between Nate Diaz and Dillon Danis outside MSG following #UFC281.👀👀👀

Barstool Sports shares an even better angle of Nate Diaz’s slap. It looks like the UFC fan favorite got a pretty good lick on Danis. From there it erupted, to the point where Diaz through something at Dillon Danis and his entourage.

Nate Diaz is outside of Madison Square Garden slapping people.

The perfect ending to a card. #UFC281
pic.twitter.com/u9Rcg9qFnB

Maybe this sparks a future bout between the two veterans. Although Diaz’s contract is finished with the UFC, he still claims he wants to keep fighting. We may see him get into the boxing ring soon, but it’s unclear what’s in store for him at this time.

Either way, Diaz has been rather active outside of the octagon. Not only was he slapping Dillon Danis, but he also got into a little tussle with someone on Jake Paul’s team. Regardless, Nate Diaz sure gave Danis something he’ll remember.