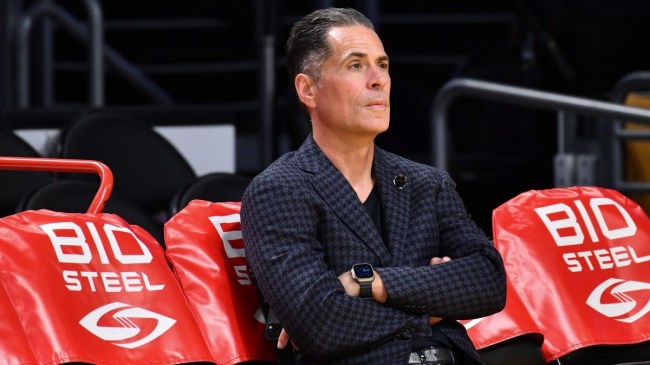 Rob Pelinka will always been able to call himself an NBA Championship-winning general manager after claiming the Larry O’Brien Trophy with the Los Angeles Lakers in 2020.

Since then, however, Pelinka’s tenure at the helm of the league’s most famous franchise has been a complete disaster.

The Lakers brought in Pelinka in 2017 to replace former GM Mitch Kupchak. One of his first major moves was signing LeBron James in free agency in 2018. He then helped land Anthony Davis via a trade with the New Orleans Pelicans in 2019. Those two served as the foundations of the Lakers’ title-winning team the following season.

But things have taken a quick downturn since that team.

The Lakers went 42-30 in the shorted season in 2020-21 and lost in the opening round of the playoffs while James and Davis dealt with injuries. Those injury issues only got worse the following year and the addition of Russell Westbrook to the mix led LA to a brutal 33-49 season.

That was enough for Pelinka to fire coach Frank Vogel and replace him with Milwaukee Bucks assistant Darvin Ham. But he failed to address any of the team’s biggest flaws, and it’s shown in a big way thus far in the new season.

The Lakers have been one of the worst teams in the NBA thus far in the new season. On the flip side, the Utah Jazz, who many believe are trying to tank, currently boasts the Western Conference’s best record at 9-3.

Two of those nine wins came by a combined 37 points over the Lakers, and basketball fans are absolutely slaughtering Pelinka over it.

I joke with people that everything since the bubble has been Rob Pelinka's grand plan to make sure LeBron never reaches Kobe's five rings. At least I think I'm joking. I hope so. Probably. https://t.co/DqnbcYDJK3

The Lakers, with potentially the greatest player of all time on their roster, are now 2-8. That’s the second-worst record in the entire NBA.

Something tells us Pelinka won’t be finishing out the year with the organization.