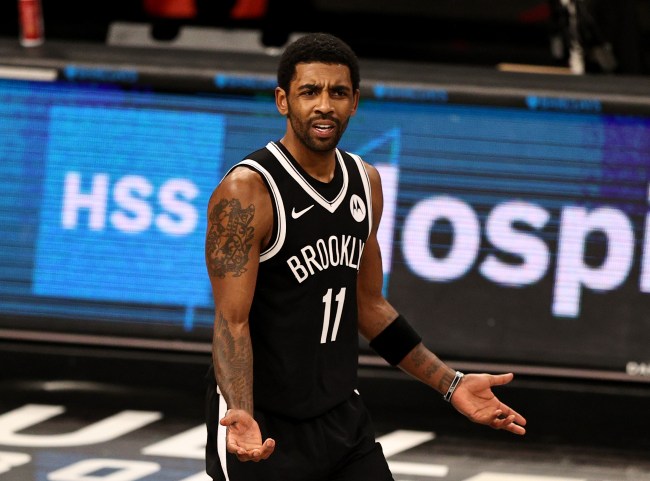 It seems like every influencer thinks they can box like Jake Paul after Paul knocked out former NBA star Nate Robinson.

On Friday night, NBA impersonator Maxisnicee posted a video where he made fun of Kyrie Irving’s pregame sage burning routine.

Irving, whose mother was half Sioux, took offense to the video because he felt that Max was mocking his indigenous culture.

Max responded to Irving by challenging the NBA superstar to a boxing match for whatever reason.

After getting called out by NBA fans over his lame attempt to mimic Jake Paul, Max continued to double down on his dumb boxing challenge.

I didn’t asked to fight . I asked for professional boxing match . And I felt like that comment he made was personal . And made me look bad . Kyrie can call me and we can talk it out like men and he educate me more on the history of his ancestors . But as of right now stream da 🥊 https://t.co/URzs4v3MNT

Something told me . U had nothin better to do than send a hating tweet . https://t.co/Wnflq9VdZM

How tf does he have more to lose then me . Wat r u sayin Brodie https://t.co/pNxdlS4oA6

What an idiot. Imagine responding with “fight me” to “please don’t disrespect my ancestors and our customs.” https://t.co/pPdzXgZJsW

Social media got you Comedians feeling brave cause nothing ain’t gone happen to ya. Athletes always gotta take the high road on this stuff. @KyrieIrving #Respect https://t.co/7VFhDX9B3D

Something told me these NBA parody guys was corny.

This takes the cake though. https://t.co/yHc5hbPraE

Lmao you weirder than Kyrie https://t.co/cHixHq5LNe