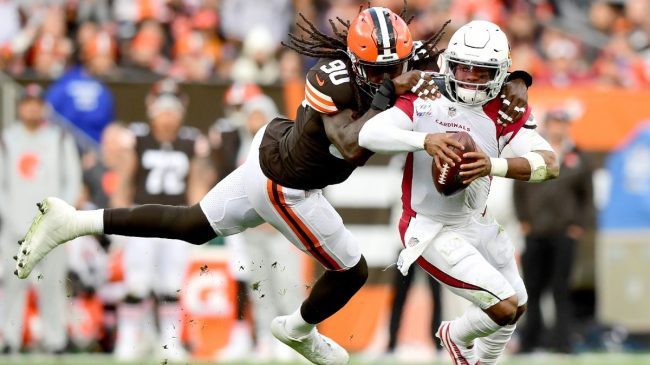 Jadeveon Clowney experienced a bounce-back year in 2021 with the Cleveland Browns.

Lining up alongside Myles Garrett, the two former top picks formed one of the AFC’s most fearful front fours. Clowney ended the year with nine sacks, his best output since his days in Houston. He also finished as a top five performer in terms of pass rush win rate.

Now, he may be looking to profit off of that performance with a bump in pay.

The Browns signed him on the cheap last year with a one-year, $8 million deal. Clowney’s asking price may be a bit too high for Cleveland to pay in 2022.

With the Browns possibly opting to move on from the veteran pass rusher, a new team is emerging as a favorite to land his services.

The New England Patriots are the new favorite to land Jadeveon Clowney, at least according to the sportsbooks. Bill Belichick is looking to add proven playmakers to his defensive unit and Clowney could help bolster an aggressive pass rushing attack.

Other Clowney suitors include the Denver Broncos, Minnesota Vikings, and Seattle Seahawks. And, obviously, the Browns could still be interested in keeping the defensive end in Cleveland if they can do it for the right price.

Meanwhile, I'm told Jadeveon Clowney will take his time and look at every opportunity in free agency and that several team are interested, per league source.

Clowney is reportedly taking his time with the free agency process, testing out the market for the best available landing spot. For now, though, it looks like New England is out in front.