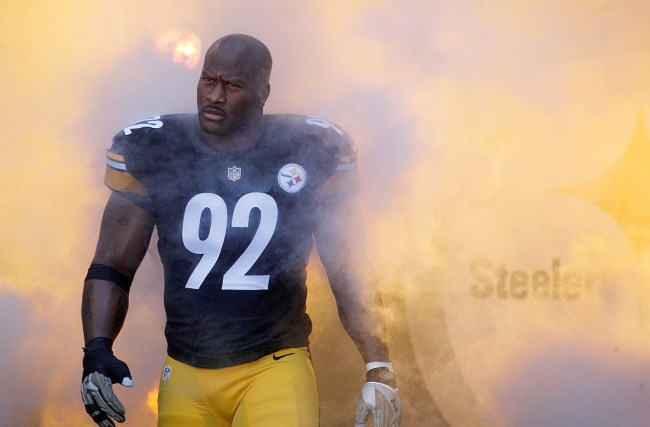 Yesterday, the Pittsburgh Steelers surprisingly released long time linebacker James Harrison with two games left in the season after he complained about lack of playing time.

The Steelers cut linebacker James Harrison on Saturday. They needed the roster spot to active offensive tackle Marcus Gilbert off the reserve/suspended list.

The franchise sack leader had seen his playing time diminish. He saw the field for only 40 defensive snaps in five games this season. He made one sack and three tackles.

Harrison complained about his lack of playing time earlier this month, saying he would not have re-signed with the Steelers if he had known he wouldn’t play.

Of course the New England Patriots are ready to swoop in to pick Harrison up for the playoffs.

Per a report from CBS Sports, the New England Patriots and Baltimore Ravens are both interested in bringing in Harrison for a playoff run. The Patriots have suffered significant injuries in their front-seven this season, potentially giving Harrison the playing time he has sought all season but failed to earn with the Steelers.

The New England Patriots have had tremendous luck in getting players fall into their lap. We’ll have to wait and see if the Ravens don’t cockblock them and pick up Harrison for themselves.