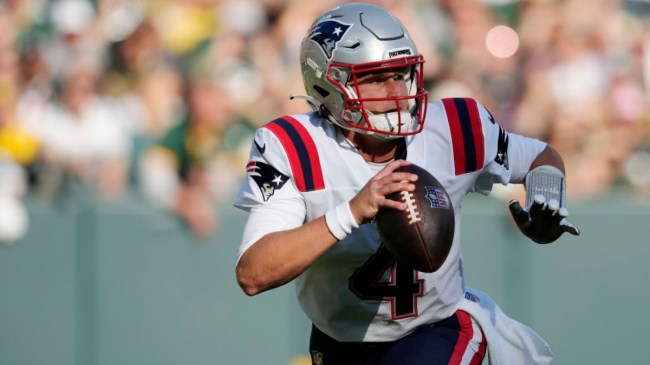 The New England Patriots have some major injury issues at quarterback right now. Mac Jones is dealing with an ankle injury that kept him out of last week’s game. Brian Hoyer has been placed on IR.

Now it seems that Mac Jones will once again be unavailable for the Patriots this week as they have reportedly decided on starting a different quarterback for the matchup against the Lions.

It was reported today that the Patriots will be starting Bailey Zappe for Sunday’s game.

Bailey Zappe gets the nod for the Pats, sources tell our @Schultz_Report. pic.twitter.com/Wr2byJR7od

Zappe also won’t have as tough of a test in his second appearance. The Packers have been a solid defense throughout the year. The Lions haven’t. They have been the league’s worst scoring defense this season. They gave up 38 points to the Eagles in Week 1 and 48 to the Seahawks last weekend.

The Pats might not reach those numbers with Zappe at the helm, but he should have opportunities to show off the prowess as a passer that he put on display in his record-breaking season in college last year.

This is also a decision that will make Patriots owner Robert Kraft happy. After Brian Hoyer started last week’s game, it was reported that Kraft actually wanted Zappe to be the starter while Mac Jones is unavailable. Now it seems he’ll be getting his wish.