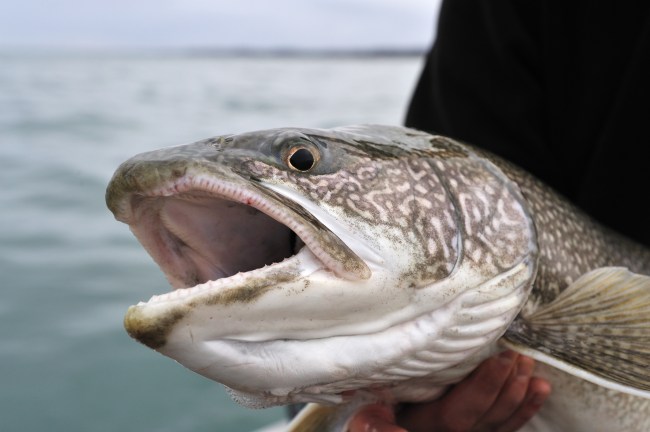 When freshwater fishing records are broken it’s usually by a small margin. We’re talking a few ounces, maybe a pound or two. It’s not often you see a dude coming off the top ropes to smash a state record by NINE pounds but that’s exactly what happened when Thomas Knight of Meredith, New Hampshire went ice fishing and hauled in a new record 37.65-pound lake trout.

Anything over ’35’ inches is generally considered a ‘trophy’ lake trout, one that could be considered the catch of a lifetime and special enough to get mounted on the wall of your man cave or donated to your local watering hole so you can marvel at your trophy lake trout every time you’re throwing back Labatts. This fish measured a whopping 40 inches long and 27-inches around and it was so big it maxed out the scale they had at the time.

The previous New Hampshire state fishing record for Lake Trout was set all the way back in 1958. That fish caught 62 years ago weighed a whopping 28 pounds and nobody had been able to best the record for over half a century until Thomas Knight pulled up his 37-pounder that looks so fat it appears to have swallowed all the other fish in the vicinity.

Look at this absolute behemoth of a lake trout. The thing’s so big it looks like it should be a saltwater fish. The thought of this thing swimming around in a lake just seems off.

A post shared by New Hampshire Fish and Game (@nhfishandgame)

The fish was eventually weighed and certified as a state record after some obstacles:

CNN reports that after catching the fish and packing it with snow in an ice box, Knight called the New Hampshire Fish and Game Department to certify the record. Knight and fisheries biologist Andy Schafermeyer placed the fish on a certified scale, but the fish surpassed the maximum weight of the scale at 30 pounds. A larger scale was secured and confirmed the trout’s weight to be 37.65 pounds.

“This fish is now the largest lake trout caught in all of New England,” Schafermeyer said. “I’m glad he got it, this couldn’t have happened to a nicer guy,” quotes CNN.

Knight, 58, fished 25 years commercially for giant bluefin tuna. Although he’s no longer involved in the tuna business due to hip surgeries, he still loves to fish. In a statement to CNN, Knight said “It means the world to me. It’s very rewarding because I put a lot of time in it. I design my own techniques and to have them work is very rewarding.” (via Penn Live)

“I design my own techniques” is some of the most northeast lake fisherman shit that I’ve ever heard in my life. That sounds like a quote from a guy you’d meet at a bar who wouldn’t tell you where he fishes, what he uses, he wouldn’t even tell you what county he fishes in, but he’d swear up and down that he catches more fish than any person on the planet. Heck, I’ve got cousins in upstate New York in the Adirondack Mountains who won’t even tell me where they fish on the lake where we all have a house because this type of fishermen is so damn secretive.

While 37 pounds is pretty gargantuan, for comparison’s sake, the Utah state record Lake Trout is 57 pounds and this fish looks like a straight-up mutant. And neither of those can compare to this would-be lake trout world record that was caught in Canada and weighs 83-pounds, but the fish was caught with a net so it doesn’t count.

According to Penn Live, the fish was preserved via taxidermy and Knight plans on renting it to his friend for two years so the buddy can display it at his restaurant. Every part of this story gets better and better. My only hope is that the ‘rent’ is paid in free mozzarella sticks for the full two years.