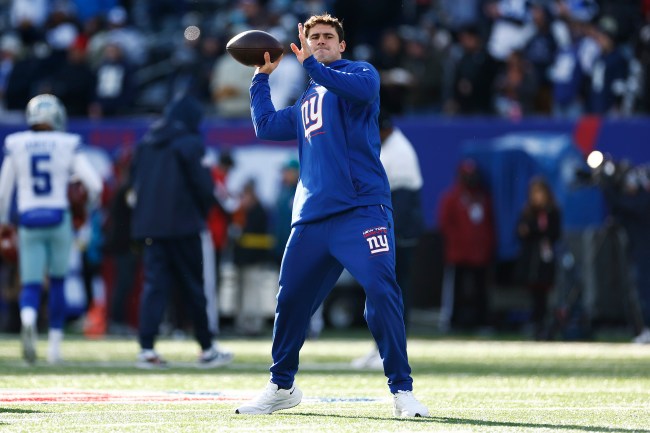 Fans of the New York Giants have known nothing but misery in recent years. Draft picks have been wasted. Bad coaches have been hired. Very few football games have been won.

Still, it appears the Giants are going to stick to their guns and give Daniel Jones another chance next year. At least, that was Adam Schefter’s assessment of the situation this morning on Get Up!.

Daniel Jones hasn’t done much to inspire hope from the Giants in his 3 seasons at the helm. Jones led the NFL in fumbles as a rookie and tied for the lead in year 2. This year he has 12 total touchdowns and 10 turnovers.

The offense has been a major disappointment since Jones took over as QB for the Giants, but he has one thing working in his favor right now. Who else would the Giants turn to?

They probably won’t land Aaron Rodgers. The Russell Wilson trade rumors died down pretty quickly. They shouldn’t enter the conversation for Deshaun Watson. This year’s QB class appears even weaker than the one where the Giants whiffed on Jones.

With the Giants currently projected to end up with 2 picks that are at least in the top 10, holding onto Jones and building up the rest of the roster (like their offensive line that hasn’t functioned properly in years) actually seems to be the right call this year.

There are plenty of other areas besides quarterback where the Giants need help. With the likes of Bryce Young and CJ Stroud becoming draft eligible next year, it would be in the Giants best interest to try and stockpile talent around them and give them a chance to step right in and succeed.

It will probably be another painful year to watch Daniel Jones as the New York Giants quarterback, but there could be a pretty great payoff at the end of it.