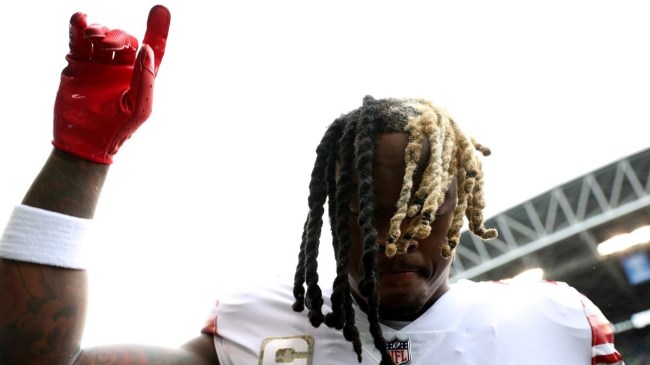 The New York Giants have been one of, if not the surprise of the 2022 NFL season. New York went into its bye week this past Sunday with a 6-2 record and currently sits in the second Wild Card spot in the NFC.

While a significant part of their success comes down to first-year head coach Brian Daboll and a resurgent Saquon Barkley, the Giants have received contributions from every. That’s particularly so on the defensive side of the ball. New York has allowed just 157 points so this season. That’s sixth-best in the league and a significant reason why it appears the team’s early success may not be a fluke.

One of the leaders of that defense is third-year safety Xavier McKinney. The Giants selected McKinney in the second round of the 2020 NFL Draft out of Alabama. After a slow start as a rookie, McKinney broke out in 2021. He recorded 93 tackles and picked off five passes, playing at a level that established him as one of the league’s best defensive backs.

McKinney was named a captain for New York prior to the 2022 season and he’s shown why through the first eight games of the season. McKinney has already racked up 38 tackles and leads a passing defense that has conceded just 208.4 yards per game thus far.

But now New York will have to soldier on without McKinney for at least the next few weeks.

Typically, the NFL bye week is seen as a time for players to get healthy and nurse any previous injuries. But that doesn’t appear to be the case for the Giants. Instead, they added McKinney to the injury after a freak injury.

The star safety posted on Twitter on Monday morning that he suffered a hand injury while on an ATV in Mexico for the bye week. He expects to be out at least for a few weeks according to the post.

Giants fans were not thrilled about the news.

In related news; I'm headed to the E.R. after putting my fist through a wall. https://t.co/7n3AVSkkz6 pic.twitter.com/Oo5cUi1E1n

WTF!?!
Your body is your commodity. It's your money maker.
Do that shit in the off-season bro.
Your productivity means so much to this team.
Very disappointing. @mckinney15__ https://t.co/YULRdB8Dj2

Dude is an idiot. I thought there was shit in their contracts preventing these situations. https://t.co/H8A6AQuskH

Thankfully for New York, it eases back into the schedule against the 1-6-1 Houston Texans in Week 10. The Giants then take on the Lions in Week 11 before a crucial showdown with the Dallas Cowboys on Thanksgiving.