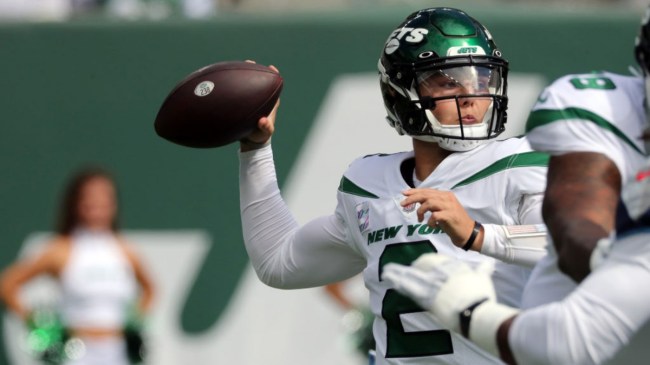 After struggling through his rookie season, Wilson’s 2nd year in the league hasn’t looked much different.

Despite the Jets being a significantly better team than they were last year and holding a shocking 6-4 record in one of the NFL’s best divisions, Wilson has failed to impress.

In 7 starts, Wilson has only managed to throw for 4 touchdowns and is averaging less than 200 yards per game.

He was particularly bad in Week 11. In Week 11 Wilson was faced with a rematch against a New England Patriots team that picked him off 3 times in Week 8. The 2nd matchup didn’t go any better for him. Wilson completed just 40.9% of his passes for 77 yards and the Jets were held to 3 points.

The Patriots offense about as bad and also only had 3 points late into the 4th, but returned a punt for a touchdown with under 30 seconds left in the game to get the win.

The way the game played out had many fans believing that if Wilson had been anything better than terrible the Jets would have won the game.

Wilson only made things worse for himself after the game as he reportedly refused to accept blame for the loss, which rubbed some of his teammates the wrong way.

Now it seems his poor play and bad handling of the situation has cost him his starting job as Adam Schefter has reported that Jets players were informed that Wilson would not start against the Bears on Sunday.

Breaking: During a team meeting minutes ago, Jets players were informed that Zach Wilson is not starting Sunday's game vs. the Chicago Bears, sources tell ESPN.

Wilson — who had a 5-2 record as a starting QB this season, with both losses coming vs. the Pats — is being benched. pic.twitter.com/fdl3mBmIHq

Jets head coach Robert Saleh has since revealed that Mike White will be the starter on Sunday.

The official announcement from the #Jets about Zach Wilson's benching.pic.twitter.com/Cd4P4Z6dS4

The Jets can’t be feeling great about their decision to spend the number 2 pick on Wilson last season. He entered the draft with concerns about the level of competition he played against in college making him look like a better prospect than he actually was.

Those concerns appear to have been valid as he has struggled for his first 2 seasons and has shown no signs of improvement.

There is at least some good news for Jets fans. With Wilson benched, it is officially Mike White season in New York again. We know from last season that White will throw the ball to Elijah Moore, which at least fixes one problem for the Jets.