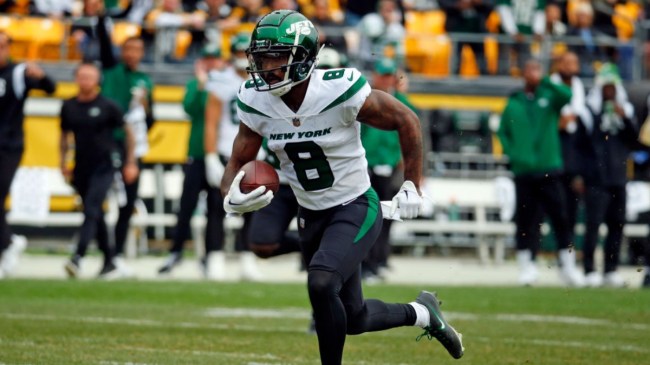 After a promising rookie season for the New York Jets, year 2 has been a major disappointment for Elijah Moore.

Moore was a favorite breakout candidate of many around the football world for the 2022 season, but he hasn’t come close to living up to those expectations. Moore recorded just 16 catches for 203 yards in the first 6 weeks of the season, leading to him requesting a trade.

That trade never materialized and a larger role unfortunately hasn’t either. Moore has no catches and just 1 target in the 3 games he’s played in since Week 8. Luckily for Moore and anybody who drafted him in fantasy this year, that could be about to change.

Today, New York Jets head coach Robert Saleh revealed to CBS Sports’ Rosina Anderson that the team will be moving Moore into the slot to better take advantage of his strengths as a receiver.

#Jets HC Robert Saleh confirmed to @JosinaAnderson that they’re moving WR Elijah Moore to the slot, ‘it’s a new position because we’ve been playing him outside for the most part’ + ‘we’re trying to find ways to utilize his strengths’: 🎥 @CBSSportsHQ #TakeFlight pic.twitter.com/jXqpFkezqa

This could be exactly what Moore needs to get his career back on track. While teams don’t tend to spend early draft picks on slot receivers, it just might need to be where Moore plays. He was very successful in the slot at Ole Miss, even managing to generate some buzz while playing on a team that also had DK Metcalf and AJ Brown at receiver.

This could be exactly the change that Moore needs to start turning things around with Jets. However, just how much of a difference it will make will depend heavily on what the Jets can get out of Zach Wilson the rest of the year.

The Jets have leaned on their run game as Wilson has struggled to make the improvements many had hoped for coming into the season. If he doesn’t pick up his play, there is only so much Moore can do to improve his own performances.

For now, at least he’s back at the position where he thrived in college and he’ll at least have a chance to try and get back on track.